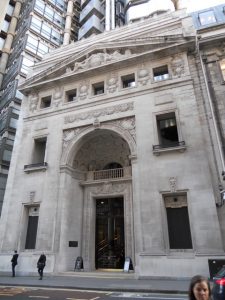 The Arctic region is undergoing rapid change, both in terms of climate and economic development.

According to Lloyd’s latest Risk Insight report, strong governance and risk management, as well as urgent scientific research, are needed to mitigate the region’s many challenging and unique risks.

The Arctic can be geographically defined in many different ways, from the Arctic Ocean alone to all land and sea North of 60°, the latter being the broad definition used by the report. This includes parts of the United States, Canada, Russia, Norway, Sweden and Finland, and the whole of Greenland and Iceland. However, “there is not one Arctic, but many, ” says the report.

Opportunity and Risk in the High North, a report prepared by Chatham House on behalf of Lloyd’s, was launched at the Shipping Club in Oslo on 12th April 2012. The event was hosted by Richard Ward, Lloyd’s Chief Executive, and included a panel discussion with Arctic experts and representatives from the shipping, energy and insurance sectors. The pace of environmental transformation currently taking place in the Arctic is unprecedented, says Richard Ward, Chief Executive, Lloyds. “Risk management clearly has a critical role to play in helping businesses, governments and communities to manage these uncertainties and minimise risks. “However, to do so effectively requires the most up to date information to analyse and control risks. There is a clear need for sustained investment in Arctic research.”

The Arctic climate is changing more rapidly than anywhere else on Earth, with implications for the region and the global environment, the report says. Rising temperatures are causing a retreat of sea ice and changes to seasonal length, weather patterns and eco-systems. Projections estimate that the Arctic Ocean will first be free of sea ice during the summer months within the next 25 to 40 years, while some scientists claim it could conceivably occur within the next decade.

The reduction in sea ice, in particular, could extend oil and gas exploration, increase access to mineral wealth and open up potential new ice-free shipping routes. Estimates suggest that untapped reserves in the Arctic could account for 30% of global undiscovered natural gas and 13% of the estimated global total of undiscovered oil. The emergence of the Arctic as a large-scale shipping route – which could result in fewer days at sea and lower fuel costs – is a longer term prospect. Indeed a tanker successfully navigated the Northern Sea Route in 2011. Although it is difficult to make definite predictions on future investment in the Arctic, the report argues that such investment could potentially reach $100billion or more over the next ten years.

Climate change will give rise to both winners and losers. While some fish stocks have flourished in warmer waters, the accessibility of many inland areas has been reduced (and this trend is likely to continue), making existing infrastructure more expensive to maintain as the permafrost layer across northern Alaska, Canada and Russia becomes unstable.

While presenting substantial business opportunities, large scale economic development in the Arctic also brings a unique and complex set of risks, the report says. Oil and gas developments and shipping, in particular, face challenging conditions including extreme cold, prolonged periods of darkness in winter, and the remoteness of Arctic locations. Weather can change quickly and weather forecasts are often uncertain, and low temperatures and the length of winter Arctic nights remain a challenge for operations. The environmental consequences of disasters in the Arctic arguably have the potential to be worse than in other regions. The resilience of the Arctic’s ecosystems in terms of withstanding risk events is weak, and political sensitivity to a disaster is high. As a result, companies operating in the Arctic face significant reputational risk, the report says.

The potential commercial opportunities in the Arctic – to discover and extract substantial quantities of oil and gas or to reduce shipping costs – may encourage some companies to take on greater business, operational and political risks. However, comprehensive and rigorous risk management will, the report suggests, be essential for companies seeking to invest in the Arctic. Companies that can manage their own risks, using technologies and services most adapted to Arctic conditions, are likely to be the most commercially successful in the region.