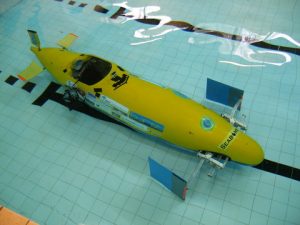 The Lloyd’s Register Educational Trust (The LRET) has joined the growing number of sponsors of the inaugural International European Submarine Races (eISR), being held during the week of 25 June 2012 in QinetiQ’s Ocean Basin at Gosport, England.  The races will see teams of University engineering students, from up to half a dozen countries, race their human-powered submarines in Europe’s largest freshwater tank, against the clock, around a demanding new slalom course in a unique sporting and engineering challenge.

“We are delighted that The LRET has joined our sponsors who now include QinetiQ, the Institute of Marine Engineering, Science and Technology (IMarEST), The Society of Naval Architects & Marine Engineers (SNAME) and The Society for Underwater Technology (SUT), ” says Race Director, Dr William Megill, FIMarEST, Director of the Ocean Technologies Lab, in the Mechanical Engineering Department at the University of Bath..

”The LRET is an independent charity operating throughout the world. It was established in 2004 by the Lloyd’s Register Group to fund advances in transportation, science, engineering and technology education, training, and research worldwide for the benefit of all. And our human powered submarine races fit the bill, as they have serious and worthwhile outcomes. They combine an engineering design challenge with technical skill development, and there are very real applications for the science and technology employed in these craft, as we seek to find ever more effective ways of exploring the waters of the world using remotely operated and autonomous underwater vehicles.”

Michael Franklin, Director of The Lloyd’s Register Educational Trust says: “We are pleased to lend our support to the first eISR, which will showcase academic achievements in engineering from around the world and demonstrate to the European audience how exciting it can be to play a part in developing new technology.”

“This is the first time these races have been held outside the USA, ” Dr Megill explains. “I am delighted that Archimede V from the Ecole Polytechniqiue de Montreal; Omer 8 from Ecole de Technologie Superieure, Quebec; Wolvlerine the submarine from the University of Michigan; Maroon Harpoon from Texas A&M University; Talon 1 from Florida Atlantic University, and Minerva from the University of Bath, will all be competing. We have interest too from a Dutch university, and also from one in France.”

All the students will have designed and built their own submarines and will then race them flooded, piloted and pedalled by a scuba diver, with the teams constantly improving their craft during the week to perfect their performance. The eISR judging panel will be chaired by Vice Admiral Sir Robert Hill, KBE, FIMarEST and comprises experienced submarine engineers. As well as the overall award to the fastest, most manoeuvrable submarine, there will be other awards made including fastest sprint speed, best manufacture, and most innovative design.

The eISR will play host on 27 June to a graduate fair and to master classes on underwater technology in all its guises; and formal and informal social events will take place throughout the week.

Capturing the imagination of school pupils – and company guests

Schools and engineering clubs in and around the Gosport area will be invited to see parts of the races. “We want to show budding young engineers just how exciting it can be to take a concept from the paper and computer stage right through every element of building and then put it to the test under competition rules – we’d like to inspire them to consider marine engineering degrees as a result of the eISR, ” says William Megill.”We will also be inviting guests from military and civilian organisations to see for themselves the astonishing capabilities of the students.”

Further information on all aspects of the Race Week is available at www.subrace.eu

I would love to come along and see these races, can anyone turn up?