Slips, trips and falls represent nearly one in three of the large personal injury claims submitted to the UK P&I Club 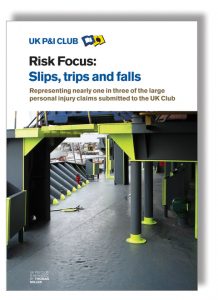 The Bow Tie loss prevention initiative involves surveyors visiting ships and, together with the managers and crew, producing Bow Tie charts specific to individual vessels that identify areas of risk and suggest how such risks might be mitigated.

As was stated at the time of the launch, extensive analysis of previous incidents over a period of 23 years has enabled the Club to identify ‘threats’, ‘consequences’ and ‘controls’, the foundations of developing reports on specific vessels. In total, the Club’s Risk Prevention Director Karl Lumbers estimates that it has identified seven primary risk hazards, 76 common threats, which if not contained could cause an incident and 450 controls which need to be in place and effective if the threats are to be contained.

Risk Focus: Slips, trips and falls’ is in effect the first in a series of new Risk Focus publications although in October 2010, the Club published ‘Risk Focus: Moorings’ as a one-off publication that reflected concerns about the increasing numbers of serious incidents occurring during mooring activities.

Mr Lumbers states that slips, trips and falls represent nearly one in three of the large personal injury claims submitted to the UK Club and have amounted to a staggering $155 m over the past ten years: “They are constant too with very little variation in numbers of claims from year to year. They are important because they represent genuine pain and suffering from people who have been injured or even killed because they have slipped, tripped or fallen aboard ship. It is not simply a matter of money, squashed metal or damaged ships as encountered in other sorts of claim.”

Inevitably many of these claims are caused by a moment of carelessness, thoughtlessness or complacency as people have moved around a ship, possibly doing their jobs, or even just because the ship is not only their place of work but where they live. It is easy to dismiss these unpleasant accidents as ‘human error’ or even ‘crew negligence’ but to examine the detail of so many of them is to reveal other contributors to the chain of causation. Training could have been deficient or even completely missing as there is often an assumption that people ‘can look after themselves’ and must take responsibility for their own actions.

As Mr Lumbers says, “The environment, which is mostly a function of design, may well have been a contributor: if there was inadequate lighting, if the dangers were not obvious, or the particular design of the ship required people to put themselves in hazardous situations just to get the job done. Visitors to the ship unfamiliar with the layout of the vessel are especially vulnerable.

“Because of the huge costs of these claims and because of the human suffering represented by each of them, we strongly believe that a concerted attack must be made on the incidence of slips, trip and falls. We need to understand better the reasons behind the existence of these hazards so that we can put in place controls that will hopefully prevent accidents occurring, but will also mitigate their consequences when they do.”

As the Bow Tie project has already proven, a proactive and precautionary approach can be very useful and in this case should enable the Club to reduce the incidence of slips, trips and falls, firstly by identifying hazards which have the potential to harm.

Mr Lumbers states that very often accidents occur because nobody has considered that what they are doing might be hazardous. He explains: “Just walking around the ship with a sharp eye and an open mind can help to identify features which might, in an unguarded moment, hurt people. It is often not the obvious like working at height or with machinery that will cause the accidents because an experienced seafarer will probably be taking the proper precautions and will be adequately clad, with procedural controls in place. Rather, just moving around the ship, going up and down companionways and ladders, carrying weights or neglecting to keep ‘one hand for the ship and one for yourself’ are frequently behind very nasty accidents.”

Concluding, ‘Risk Focus: Slips, trips and falls’ discusses some simple actions that will hopefully reduce incidents and so prevent distress and pain being imposed on so many seafarers, ship visitors and their dependents.

The UK Club’s size and the scale of the managers’ operations has enabled the latter to develop specialist skills and expertise seldom seen in marine P&I. In 350 ports around the world, on-the-spot help and local expertise is always available to members and the masters of their ships from the Club’s 460 correspondents and claims handling services and advice from the network of offices and branches in London, Piraeus, New Jersey, San Francisco, Hong Kong, Singapore, Tokyo, Beijing and Shanghai.

Managing a professional practice out of the recession