Harris Pye takes on over £10.5 million worth of offshore projects in one month 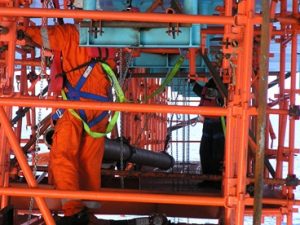 Prendergast stated today:  ‘I can confirm that we are currently undertaking three major rig renovations simultaneously in the UK, Singapore and Brasil.  Whilst I’d rather not say at this stage who the clients are, they are major players in the offshore oil & gas industry, and the combined value of the contracts is in excess of £10.5 million (UK sterling).

“All three projects will be completed by the end of May, and I look forward to releasing project details at that time.

“Harris Pye is known for its excellent project management, quality of services and speed of turnaround, ” he adds.  Recent examples certainly confirm this.

Men at work on the Ocean Clipper

In January the company completed a comprehensive refit and refurbishment of Diamond Offshore Drilling Inc’s (DODI) drillship, The Ocean Clipper.  All works were completed in just 90 days.  The scale of the project was immense and included electrical works, accommodation, painting, cranes, 250 tonnes of steelwork, over 2 miles of piping renewals and the removal and replacement of transformers and motors.

Totalling 247, 235 man hours and utilising a 600-plus workforce, the contract was one of the largest offshore oil and gas projects for the South Wales headquartered company.  Despite the time-critical schedule, extraordinarily high man hours and large workforce, safety standards were superb and there were no serious accidents or injuries to any personnel.

Simultaneous to the Ocean Clipper renovations, Harris Pye also completed a major project on the Maersk Discoverer which was undertaken whilst the rig was on tow from South Africa to Egypt.  As well as electrical work, heavy pipes were rigged and man-handled into difficult positions, then fully welded in situ. Over the past twelve years Harris Pye has expanded its worldwide bases and built an enviable reputation as world leaders in the offshore oil & gas sector. “Our approach to project managed in situ turnkey repairs offers very definite advantages to the offshore oil and gas sector, ” explains Group Technical Director, Chris David.  “In one year alone we completed over $60 million-worth of turnkey project work involving steel renewals, pipework and mechanical work.”

Harris Pye was involved in the pioneer projects when FPSOs and FSOs were still experimental in the 1980s.  The company had key inputs to the development of safe use of dual fuel for boilers and the safe and practical application and installation.  “We have been involved in more than 45% of the world’s FPSOs ever converted or new built, ” confirms David.

No wonder, then, that the company is seeing such a dramatic increase in offshore contracts.  Both Prendergast and David confirmed that they are dealing with several enquiries from Africa as well.

“As we become more established in the offshore industry and our reputation increases, naturally so do our orders.  The quality of our work speaks for itself – our corporate standard is ‘Delivering Excellence’.  We’re delighted with the increase in both new and also repeat business from clients such as SBM Offshore with whom we’ve had a relationship for over twenty years, ” says David.

Harris Pye Engineering – the Group’s new worldwide branding – operates globally on a 24/7 basis and with 19 offices worldwide, offers full vessel repair and conversion services – including in situ.  The company has experienced dramatic growth and expansion over the last decade, with a turnover increase in excess of 60% in the last five years alone.  Further information on the Harris Pye Group is available from www.harrispye.com

• The Harris Pye Group is a rapidly expanding global player with active involvement in many key maritime, offshore oil & gas and associated onshore industrial sectors. Operating worldwide on a 24/7 basis, the Group’s emphasis is on cost effective repair, preventative maintenance and conversion work.

• Staff strength within the Group has grown from 10 in 1976 to a thousand employees in their United Kingdom head office facility (at Barry in South Wales) and main stations in Sharjah and Singapore; and offices and repair facilities in Australia, Abu Dhabi, Bahrain, Brazil, China, Dubai, Japan, Oman, Poland, Portugal, Qatar, Saudi Arabia and Scandinavia.

• The Group philosophy is to provide a global service with a focus on supplying top quality products and fast and efficient customer service.  Further information at www.harrispye.com

Fugro and NYK team up with OYO Corporation...