Thursday, 19 January 2012 07:00 -Pirate attacks against vessels in East and West Africa accounted for the majority of world attacks in 2011, signalling a rising trend, the International Chamber of Commerce (ICC) International Maritime Bureau’s (IMB) global piracy report revealed today.  Of the 439 attacks reported to the IMB in 2011, 275 attacks took place off Somalia on the east coast and in the Gulf of Guinea on the west coast of Africa. 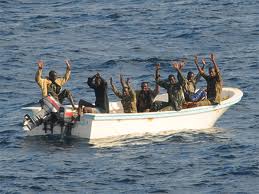 Somali pirates continue to account for the majority of attacks – approximately 54%. But while the overall number of Somali incidents increased from 219 in 2010 to 237 in 2011, the number of successful hijackings decreased from 49 to 28.

The overall figures for Somali piracy could have been much higher if it were not for the continued efforts of international naval forces, IMB reports. In the last quarter of 2011 alone, pre-emptive strikes by international navies disrupted at least 20 Pirate Action Groups (PAGs) before they could become a threat to commercial fleets. The last quarter of 2010 saw 90 incidents and 19 vessels hijacked; in 2011, those numbers fell to 31 and four, respectively.

“These pre-emptive naval strikes, the hardening of vessels in line with the Best Management Practices (BMP) and the deterrent effect of Privately Contracted Armed Security Personnel (PCASP), have all contributed to this decrease, ” said Pottengal Mukundan, Director of the IMB Piracy Reporting Centre (IMB PRC), which has been monitoring piracy worldwide since 1991. “The role of the navies is critical to the anti-piracy efforts in this area.”

Although the number of vessels employing and reporting the carriage of PCASP increased in 2011, the regulation and vetting of PCASP still needs to be adequately addressed, Pottengal Mukundan warned. Until such time as a comprehensive legal framework is in place, owners and Masters should follow the International Maritime Organization and industry guidelines on the carriage of PCASP.

The IMB report shows that Somali pirate attacks were predominantly concentrated within the cross roads of the Arabian Sea and the Gulf of Aden.  However, 2011 marked the first hijacking by Somali pirates of an anchored vessel from within the territorial waters of a foreign State – namely, Oman – highlighting the need for ports and vessels at anchorages in the region to be vigilant.

Elsewhere, Nigeria and Benin continued to be piracy hotspots. While 10 attacks were reported in Nigeria, including two hijackings, IMB warns that this number is not representative of the real threat of Nigeria piracy. Underreporting of attacks in Nigeria continues to be a cause for concern, and IMB states that it is aware of at least another 34 unreported incidents in Nigerian waters.

Also in 2011 a probable extension of Nigerian piracy into neighbouring Benin included 20 incidents against tankers, eight of which were hijacked and had cargoes partly stolen. Although the average length of captivity for ships taken off the coasts of Nigeria and Benin tends to be roughly 10 days, compared to six months in Somali hijackings, IMB warns that these attacks can be more violent.

In South East Asia and the Indian Subcontinent, vessels in Bangladesh reported 10 incidents of armed robbery in the approaches to Chittagong. This is a significant reduction from the 23 incidents reported in 2010 and reflects the initiatives taken by the Bangladesh Coast Guard to curb piracy in their waters. Nonetheless, anchorages in the approaches to Chittagong remain an area of concern.

Indonesia has seen a rise in armed robbery for the second straight year. The incidents continue to be local and opportunistic, according to IMB, and usually against anchored vessels. The 46 reported incidents – up from 40 in 2010 – include 41 vessels boarded, two attempted attacks, and three cases of tugs and barges being hijacked whilst underway.

Attacks in the South China Sea fell from 31 in 2010 to 13 in 2011. This included nine boarded vessels, three attempted attacks, and the hijacking of one tug and its barge.

The IMB Piracy Reporting Centre (IMB PRC) is the world’s only manned centre receiving and disseminating reports of piracy and armed robbery 24 hours a day, across the globe. As part of the ICC, it is an independent body set up to monitor attacks, free of political interference. IMB strongly urges shipmasters and owners to report all actual, attempted, and suspicious piracy and armed robbery incidents to the IMB Piracy Reporting Centre. Transparent statistics from an independent, non-political organization is vital to encouraging authorities to allocate resources to tackle piracy firmly.

IMB offers the latest piracy reports free of charge. To request a PDF version of the report by email, please visit: http://www.icc-ccs.org/requestreport

Latest attacks may also be viewed on the IMB Live Piracy Map at: http://www.icc-ccs.org/livepiracymap

Comments
Yes, the successful Somali pirates boarding’s where decreased due to the measures taken by the IMO, the international shipping community, the patrolling efforts of the naval vessels and command centres, plus the Piracy reporting centre and of coerce from the extensive effort given by the security guards on merchant vessels.

For the time been, all looks better, until the moment by which the Somali pirates opt to revise their tactics, their equipment and their goal.

All hands involved to the deterrence of piracy should be ready for new a confrontation in order to avoid more crucial incidents and definitely to protect the lives of the crews, as this factor of casualties remains the same, even if the successful pirates boarding’s are seriously decreased.