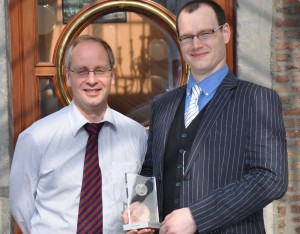 Hamburg/Germany, 20 April 2012 – Richard Pawling has been announced as the winner of the GL COMPIT Award 2012. The British computer aided design expert’s paper “The Development of Modelling Methods and Interface Tools Supporting a Risk Based Approach to Fire Safety in Ship Design”, was honoured for its contribution to the promotion of innovative approaches in conceptual ship design, at the COMPIT Conference which took place from 16 to 18 April 2012 in Liege, Belgium.

The jury singled out Mr Pawling, from a short list of several highly qualified candidates, because his paper combined advanced engineering simulations (fire simulations and evacuation simulations) with risk-based design approaches. Risk based design approaches, which are widely advocated by IMO and classification societies alike, offer the ship designer complete design freedom, as long as a certain safety level is achieved. The jury noted that Mr Pawling’s contribution reflects a general trend in the ship design community and commended the paper for its direct relevance to practical applications and its clarity and precision of expression.

Richard Pawling completed his MEng in Naval Architecture and Marine Engineering at UCL in 2001. He then joined the Design Research Centre (DRC) as a research student investigating the application of the Design Building Block approach to innovative ship design. Gaining his PhD in 2007, he continued his research both in the DRC and via a secondment in industry. His main area of interest is the further development of methods and tools for computer aided ship design.

COMPIT is the abbreviation for „Computer Applications and Information Technology in the Maritime Industries“. The conference, which took place for the eleventh time, offered information on advanced IT applications for the ship life cycle. Topics such as “Virtual Reality, ” “Marine Robotics”, and “IT Tools for Fuel Efficiency”, amongst others, were discussed by the participants. As in previous years, Germanischer Lloyd was a main sponsor of this event.

This is the fifth time that a young scientist has been presented with the GL COMPIT Award at this prestigious conference. Previous winners of the award are: