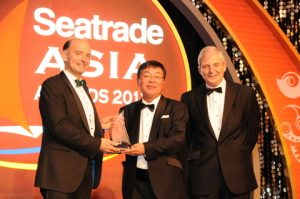 Singapore – ClassNK earned top honors for its work as Asia’s leading classification society, as well as its role in education and training in the region, as it received both the “Classification Society Award ” and the “Education and Training Award ” at the Seatrade Asia Awards held at the Shangri-La Hotel in Singapore on 23 April.

Organized by London-based maritime media company Seatrade Communications, each year the Seatrade Asia Awards recognize excellence in the Asian maritime industry in such fields as innovation, safety, and education. 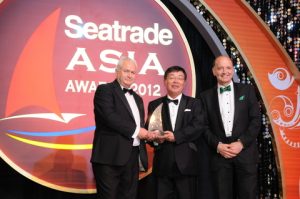 The selections reflect ClassNK’s commitment to innovation and safety in the greater Asian maritime industry, as well as its dedication and contributions to the education of maritime personnel via its ClassNK Academy and ECDIS training certification programs. This marks the second consecutive year and the third time that ClassNK has been awarded the “Classification Society Award”, as well as the first time the Society has received the “Education and Training Award”, since the Seatrade Asia Awards were established in 2008.

Chairman and President Noboru Ueda accepted both awards on behalf of the society, acknowledging the importance of the achievement by saying: “It is a great honor to be recognized not only as the leading classification society in Asia but also for our increasing role in education & training support services as well. With this vote of confidence from the Asian maritime industry, we intend to continue to expand the range of both our traditional classification services and our educational and training support services to meet the growing needs of shipyards, owners, and operators here in Asia and around the world.”

Since its founding in 1899, Tokyo-based ClassNK has grown to become the world’s largest class society with more than 198 million gross tons currently on its register. This amounts to roughly 20% of the world’s ocean going merchant fleet under class. In addition to the society’s continued success in the classification sector, ClassNK has devoted substantial efforts to expanding the scope of its services by offering its independently developed ClassNK Academy courses to help train maritime personnel, as well as offering new certification services for ECDIS system training programs and other seafarer related training support services.

The “Classification Society Award” is presented to a class society that has conducted the most distinguished activities in the Asian maritime sector, including providing the best services to the community.

The “Education and Training Award” is presented to a company or an organization that has contributed the most to the development of education and training in the Asian maritime community.