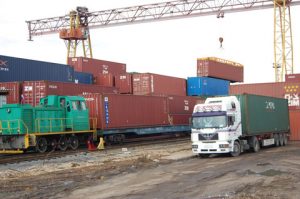 The Global Container Service Group (GCS) has recently taken delivery of the first batch of what will be a total of 224 rail flat-cars, each 80ft long, which have been built by Transmash in Engels, a city in the Saratov region of Russia. Delivery of the first 32 flat-cars should be completed during April 2012.

The new flat-cars will be deployed in block trains operated by Ruscon, a member of the GCS Group. As a multimodal specialist, Ruscon already operates several regular intermodal services from the port of Novorossiysk to principal destinations in the European part of Russia, including Moscow.

In addition to expanding its owned wagon fleet, GCS plans to increase the number of long-term leased flat-cars operated by Ruscon to over 450 units.

This new capacity will enable Ruscon to expand its block train operations. Its most recent new service, launched last December, serves the port of Novorossiysk and operates to the Tikhonovo intermodal terminal in Elabuga, Tatarstan. Two trains per week each offer delivery of 56 to 64 x 40ft containers to Elabuga with a fixed transit time from Novorossiysk to Tikhonovo of four days.

Ruscon is also expanding its trucking fleet and has recently commissioned 20 new MAN container trucks. This brings its owned truck fleet to over 100 units.

The new trucks will be dedicated to serving the company’s key contract accounts in St Petersburg and Novorossiysk.

Global Container Service (GCS) has worked successfully in the Russian container market since 1995. Beginning in the liner agency business, today it counts among the top ten container transport companies in Russia and the CIS.

In the near future, the group plans to further expand its existing companies and add new ones in order to match the growing demand for professional transport services in Russia, the CIS and further afield. A strategic target of GCS is to triple the volume of revenue and double its container throughput over the next five years. That will be achieved through consolidation of its vertically-integrated systems for seamless delivery of containers to any destination of Russia and world-wide.  In embracing that challenge GCS firmly relies on its more than 900 staff and close partnerships with leading Russian and international transport companies.

Ruscon is one of the leading transport operators in the Russian container industry today, being the multimodal branch of GCS. Its experienced team, counting more than 700 people in nine offices throughout Russia and CIS, handles almost 150, 000 TEU a year.

The Nelson Collection of the Aikaterini Laskaridis Foundation in Piraeus Greece