Diana Containerships Inc declares cash dividend of US$ 0.25 per share for Q1

Time charter revenues were $12.4 million for the first quarter of 2012, compared to $3.2 million for the same period of 2011, mainly due to the increase in the number of vessels in the fleet following the delivery of the Maersk Merlion, Maersk Malacca and Maersk Madrid in June 2011 and the delivery of the Cap San Marco, Cap San Raphael, APL Sardonyx and APL Spinel in February and March 2012.

“The dividend we have just announced represents a substantial increase over the prior level, as the continued growth of our fleet has expanded the Company’s earnings and dividend capacity. However, the current dividend rate does not reflect our full potential yield for the future, since four of our vessels joined the fleet during the 2012 first quarter, three in February and one in March, and therefore did not contribute to revenues and earnings for the full quarter. As we receive the full benefit of the revenue and earnings generated by our additional vessels in subsequent quarters of this year, we would expect our dividend potential to increase. We will continue to deliver on our strategy to build a fleet of quality container vessels with very lucrative time charters and a stable revenue stream, ” said Symeon Palios, Chairman and Chief Executive Officer of Diana Containerships Inc.

** Total commission as a percentage of charterhire paid to third parties and Diana Shipping Services S.A. *** Charterers’ optional period to redeliver the vessel to owners. Charterers have the right to add the off hire days, if any, and therefore the optional period may be extended.

2 The charterer has the option to employ the vessel for a further 12 month period, plus or minus 45 days at a gross daily rate of $25, 000. The optional period, if exercised, must be declared on or before the end of the 20th month of employment and will only commence at the end of the 24th month. 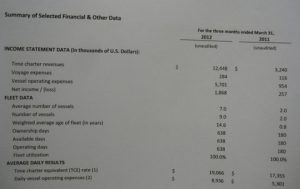 (1) Time charter equivalent rates, or TCE rates, are defined as our time charter revenues less voyage expenses during a period divided by the number of our available days during the period, which is consistent with industry standards.  Voyage expenses include port charges, bunker (fuel) expenses, canal charges and commissions.  TCE is a non-GAAP measure.  TCE rate is a standard shipping industry performance measure used primarily to compare daily earnings generated by vessels on time charters with daily earnings generated by vessels on voyage charters, because charter hire rates for vessels on voyage charters are generally not expressed in per day amounts while charter hire rates for vessels on time charters are generally expressed in such amounts.

In addition to these important factors, other important factors that, in our view, could cause actual results to differ materially from those discussed in the forward-looking statements include the strength of world economies and currencies, general market conditions, including fluctuations in charter rates and vessel values, changes in demand for containership capacity, changes in our operating expenses, including bunker prices, drydocking and insurance costs, the market for our vessels, availability of financing and refinancing, changes in governmental rules and regulations or actions taken by regulatory authorities, potential liability from pending or future litigation, general domestic and international political conditions, potential disruption of shipping routes due to accidents or political events, vessels breakdowns and instances of off-hires and other factors.  Please see our filings with the Securities and Exchange Commission for a more complete discussion of these and other risks and uncertainties. 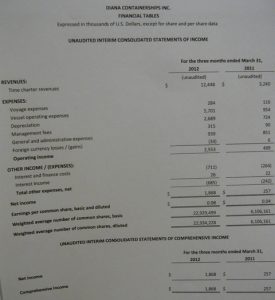 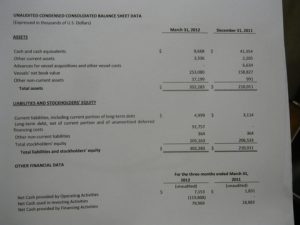 Regulation is greatest challenge for insurance industry in year ahead, according to Lloyd’s survey