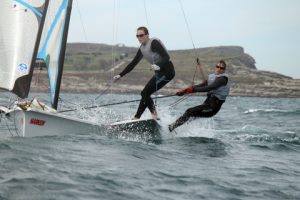 Friday 4 May 2012 -The International Sailing Federation (ISAF) has confirmed the Mackay FX has been selected for the Women’s Skiff event at the Rio 2016 Olympic Sailing Competition.

ISAF Council considered the recommendations of the Evaluation Panel, the Equipment Committee and the Events Committee and, after a comprehensive discussion, voted with the majority of members in favour of the Mackay FX.