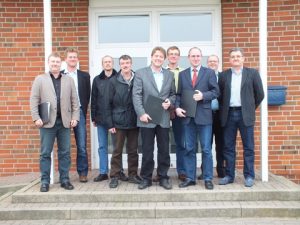 Hamburg/Germany, 8 May 2012 – The only independent wind turbine testing site in the German federal state of Schleswig-Holstein will soon be ready to accept its first wind turbines. The test field, which has been developed by GL Garrad Hassan, GEO (Gesellschaft für Energie und Oekologie mbH) and Bürgerwindpark Janneby e.G, received final building approval and will launch testing activities at the end of 2012. The opening of the Janneby site will mark the return of independent testing facilities for wind turbines in Schleswig-Holstein since the end of the 1990’s.

The test field is designed for the assessment of new onshore wind turbine prototypes, a crucial part of being able to obtain certification for a new product. The site comprises eight test beds and meets IEC Class II wind condition classification. The average annual wind speed is 7.1m/s at 100 meters high. The testing phase can run up to five years, for turbines of up to 150m in total height.

Manufacturers who choose to use the test field will be able to make use of the full range of GL Garrad Hassan services, including: wind measurements, acoustic, power performance, load, power quality and low voltage ride through (LVRT) measurements. A LiDAR test site is also planned for development.

Independent testing and measurement are keys in increasing the reliability, efficiency and performance of wind turbines, propelling the optimisation of existing, and development of future designs to meet the challenges of this burgeoning industry.

GL Garrad Hassan is one of the world’s largest renewable energy consultancies and a recognised technical authority on the subject. It offers independent technical and engineering services, products, and training courses to the onshore and offshore wind, wave, tidal and solar sectors. For more information on GL Garrad Hassan, please visit www.gl-garradhassan.com