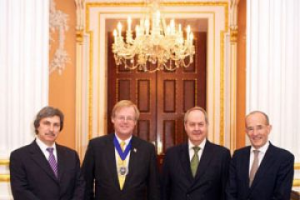 The winners of the 2012 Onassis Prizes, awarded to the world’s foremost academics in the fields of finance, international trade and shipping, were announced at Mansion House in London last Tuesday.

The prestigious prizes, each worth $200, 000, are sponsored by the Alexander S. Onassis Public Benefit Foundation and awarded every three years by Cass Business School, part of City University London, jointly with the Onassis Foundation.

Judged by a panel of distinguished academics, including two Nobel Laureates, the prizes recognise the contribution of world leading academics to the fields of finance, international trade and shipping.

The awards are intended to honour academic achievements that have not previously had a platform for global recognition and it is hoped they will in time receive the same prestige as the Nobel Prize for Economics.

The 2012 Onassis Prize for Finance has been awarded to Professor Stephen Ross from the MIT Sloan School of Management. Professor Ross is best known for having invented ‘arbitrage pricing theory’ and the ‘theory of agency’. He is also celebrated as the co-discoverer of ‘risk neutral pricing’ and of the ‘binomial model’ for pricing derivatives.

Professor Elhanan Helpman of Harvard University has received the 2012 Onassis Prize for International Trade. Professor Helpman is widely acclaimed for his role in founding the ‘new trade’ and ‘new growth’ theories, which emphasise the roles of economies of scale and imperfect competition, and for his work on special interest politics.

Ernst Frankel, Professor of Mechanical and Ocean Engineering at Massachusetts Institute of Technology, has been a prominent figure in both shipping and academia during a career spanning almost 70 years. In that time he has published 23 books, hundreds of academic papers and served as President of the International Association of Maritime Economists.

Professor Richard Goss of Cardiff University has conducted extensive research in the field of shipping competition and port governance, much of which is still widely influential today. In a survey of the seminal maritime thinkers of the last century, Professor Goss was found to be more prolific than any other researcher in the port field. He was also instrumental in setting up the International Association of Maritime Economists in 1992.

Professor Arnljot Stromme Svendsen has been with the Norwegian School of Economics and Business Administration since he began his career there in 1948. He has built a name as one of the world’s most respected maritime academics and is an Honorary President of the International Association of Maritime Economists.

Dr Anthony Papadimitriou, President of the Onassis Public Benefit Foundation and Chairman of the panel of prize judges, said:

“Onassis became famous in his lifetime, and after, for his mastery of the science and art of Shipping, Trade and Finance. The Onassis Foundation is proud to associate once more the name of its Founder with the Corporation of the City of London and the Costas Grammenos Center for Shipping Trade and Finance (City University) which respectively are world centers of the practice and academic study of these three entrepreneurship areas. This second edition of the Prizes is on an unparalleled level”.

Commenting on the winners, Professor Costas Grammenos, who is the founder of Cass Business School’s International Centre for Shipping, Trade and Finance and was instrumental in launching the prizes, said:

“The Onassis Prizes recognise the lifetime contribution of some of the world’s most highly respected academics in finance, international trade and shipping. I warmly congratulate the winners whose distinguished achievements have profoundly influenced their disciplines and continue to have an impact on academic thinking and business conduct worldwide.”

The prizes were announced by the Lord Mayor of the City of London, Alderman David Wootton, at a ceremony in Mansion House. He said:

“The Onassis Prizes celebrate the core values of the City of London, recognizing the efforts of individuals who have dedicated their careers to the advancement of their field, through perseverance, integrity and innovation. Congratulations to all the prize-winners – each one a world-leader in their sector. Their excellent, inspirational work has resonated throughout the business world and we are all beneficiaries of their success.”

This is the first time the Onassis Prize has been split into separate categories for finance, trade and shipping. Previously the prize was awarded to a single academic from one field on a rotational basis.

The inaugural Onassis Prize was awarded in 2008 to Chicago University Professor Eugene Fama who is credited as the inventor of efficient market hypothesis.

The five winners will each give a lecture at Cass Business School on Wednesday 12 September, following which they will be awarded the prizes at a banquet at London’s Guildhall for more than 700 international business leaders, top academics and senior government figures.

The Onassis Public Benefit Foundation is named in honour of Alexander Onassis, son of the Greek shipping magnate Aristotle Onassis, who died in 1975.