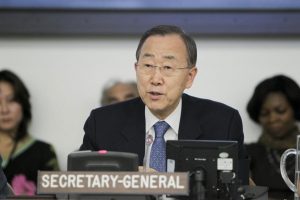 The United Nations Pavilion at Expo 2012 in Yeosu, Republic of Korea,  opened its doors on 12 May 2012 to an estimated 11 million visitors who are expected to visit the event over the next three months.

The UN pavilion – the second largest at Expo 2012 – will take visitors on a multi-sensory, interactive exploration of the marine environment. The pavilion will highlight the key role played by oceans and coasts in the global economy, including human health, biodiversity, sustainable energy and food security.

Under the theme Oceans and Coasts: Connecting our Lives, Ensuring our Future, the pavilion will highlight the work of 24 UN bodies and international organizations through a specially-designed ‘space tunnel’, quizzes, film screenings, workshops and a diverse calendar of exhibitions and events.

In the space tunnel – the entry point of the UN pavilion – visitors are met with striking images of the world’s oceans as seen from outer space. Next, they begin a journey on land, learning how everyday choices and actions can impact the health of oceans and coasts.

Moving on to the ocean surface, visitors can take part in an oil spill clean-up activity and learn about the wide-ranging impacts of marine litter, before experiencing the rich biodiversity that inhabits the deep ocean.

The journey ends at an interactive pledge wall, where visitors can commit to individual actions to support the world’s oceans and coasts.

Some 104 countries are taking part in Expo 2012 under the overall theme, The Living Ocean and Coast: Diversity of Resources and Sustainable Activities.

“The exhibits highlight the invaluable services and functions provided by our oceans, seas, and coastal areas – from the food we eat to the oxygen we breathe, “ said United Nations Secretary-General Ban Ki-moon.

“The marine realm is facing multiple challenges – from over-fishing and climate change to pollution from hazardous materials.  The Expo and the UN Pavilion can inspire people, business and governments to greater awareness and more decisive action, “ he said.

“We have all the policies and technologies we need to sustainably manage these extraordinary assets.  Yeosu 2012 can contribute towards a positive outcome at Rio+20 in June and help us build the future we want, “ said Mr. Ban.

With just under two months until the Rio+20 Conference on Sustainable Development in Brazil, the UN pavilion highlights in detail how healthy seas and coasts can be a major contributor to the transition towards a low-carbon, resource-efficient green economy.

According a recent UNEP report, there is huge potential for economic growth and poverty eradication from well-managed marine sectors.

Green Economy in a Blue World, released in January 2012, shows how the ecological health and economic productivity of marine and coastal ecosystems can be boosted by shifting to a more sustainable economic paradigm that taps their natural potential – from generating renewable energy and promoting eco-tourism, to sustainable fisheries and transport.

“Rio+20 has been called a ‘once in a lifetime opportunity’ to get the world on track for a sustainable 21st century and beyond, “ said co-Commissioner General of the UN Pavilion and UN Environment Programme Deputy Executive Director Amina Mohamed.

“Realizing the role of oceans in sustainable development means understanding how the choices we make – such as the kinds of seafood we consume, or recycling waste to reduce marine litter – can impact on the marine environment. We hope that visitors to the UN Pavilion at Expo 2012 will be inspired to play their part in sustainable development, by taking individual actions that can deliver the future we want, “ added Ms. Mohamed.

“We hope the interactive journey at the UN pavilion will provide visitors with insights into the rich but fragile life of oceans and coasts, and to demonstrate how we, as individuals and communities, can make a difference, “ said co-Commissioner General of the UN Pavilion Samuel Koo.

“It is our sincere hope that through the UN Pavilion, visitors will come to connect closely with our oceans, coasts and the United Nations, “ added Mr. Koo.

The official website of the UN Pavilion at Expo 2012, including more details on exhibits and a calendar of upcoming events, is available at: http://www.un-expo2012.org

Fish products are vital for food security and human wellbeing, supplying over 4.2 billion people with at least 15 per cent of their average animal protein intake

In 2009, fisheries supported the livelihoods of about 540 million people (8 per cent of the world population)

Approximately 30 per cent of the world’s fish stocks are overexploited, depleted, or recovering from depletion and 50 per cent are fully exploited

Increasing carbon dioxide levels in the air are altering the chemistry of the ocean’s surface causing it to become more acidic. The ocean’s pH declined from 8.11 in 1992 to 8.06 in 2007, posing threats to marine food webs and ecosystems

If ocean acidification trends continue, 75 percent of all coral reefs will face high to critical threat levels by mid-century

International shipping transports around 90 per cent of world commerce and is the safest, most secure, most efficient and most environmentally sound means of bulk transportation

The tourism economy, including coastal tourism, represents 5 percent of global GDP and contributes 6 to 7 per cent of total employment. Estimates show global spending on ecotourism is increasing by about six times the industry-wide rate of growth

The amount of nitrogen reaching oceans and coasts has increased three-fold from pre-industrial levels – primarily due to agricultural run-off and untreated sewage. This can degrade marine ecosystems and groundwater and lead to the formation of oxygen-poor ‘dead’ zones.

Covering a surface area of over 2, 710 km², Expo 2012 at Yeosu aims to enhance the international community’s understanding of the function and value of oceans and coasts, share knowledge on the sustainable use of the marine environment and enhance cooperation in the marine sector.

The first World Expo took place in 1851 in London and was designed to showcase an inventory of all branches of human endeavour.

Since then, World Expos and International Expos have been held in cities across the globe, attracting millions of visitors.

The last World Expo was held in Shanghai in 2010 under the theme Better City, Better Life. It was the largest Expo ever held and attracted over 70 million visitors in 184 days.

An environmental impact assessment of Expo 2010, carried out by UNEP, is available at: http://www.unep.org/pdf/SHANGHAI_REPORT_FullReport.pdf