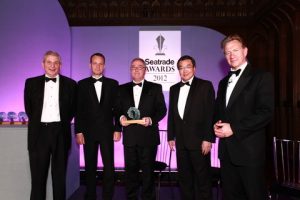 The SaveOurSeafarers (SOS) campaign has been honoured with a Seatrade Award for its significant contribution in the fight against Somali piracy.

The Seatrade Award for Countering Piracy was presented at the prestigious and respected Seatrade Awards ceremony, with more than 350 of the maritime industry’s key players attending a high profile dinner at the Guildhall in London last night (May 14). Former UK Minister of State Michael Portillo was the Guest of Honour.

Alastair Evitt, Chairman of SaveOurSeafarers, who accepted the award on behalf of the campaign, said:

“Since the launch of the SOS campaign just over a year ago, SOS has developed a very strong and distinctive brand; it has helped to place the issue of Somali piracy firmly on the international agenda by securing broad mainstream media coverage; and it  has helped achieve political recognition of Somali piracy as a real economic and humanitarian threat, significantly raising awareness and interest worldwide in the terrifying economic and humanitarian realities of Somali piracy, and the on-going plight of seafarers and their families.

“Currently over 225 seafarers are held hostage by Somali pirates, deprived not only of their freedom but also of proper food, and facing mental and physical torture pending their release for ransom. The latest hijacking of Dynacom’s suezmax tanker Smyrni is a harsh reminder that we need more not less naval forces and government engagement; and that we need to maintain the ability to effect the payment of ransoms, a distasteful but lawful activity that is necessary to secure the release of seafarers, ship and cargo.” 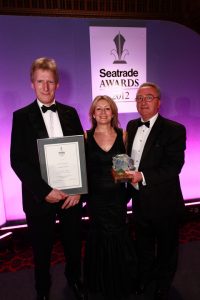 SOS SaveOurSeafarers is the biggest ever grouping of the international maritime industry with 31 international organisations joined together to raise awareness of the human and economic cost of piracy via the media and by using approaches to politicians and industrial leaders at the highest level.

Its main aims are to raise the profile of Somali piracy in political and media circles, in order to see Somali piracy deterred, defeated and eradicated, and to stop seafarers being tortured and murdered

Focus on Greece and the Cruise Industry