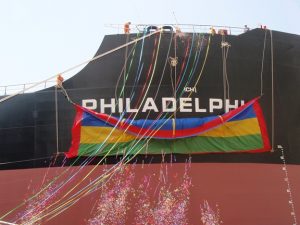 Drawdown of an additional US$ 36.65 million from a loan facility with China Eximbank

ATHENS, GREECE  Diana Shipping Inc. (NYSE: DSX), a global shipping company specializing in the ownership and operation of dry bulk vessels,  yesterday announced that on May 16, 2012 it took delivery of the newly-built m/v “Philadelphia”, a Newcastlemax dry bulk carrier of 206, 040 dwt that was contracted in April 2010.

As previously announced, the m/v “Philadelphia” is chartered to EDF Trading Ltd., London, at a gross rate of US$18, 000 per day, minus a 5% commission paid to third parties, for a minimum forty-four (44) to a maximum fifty (50) month period. The charter commenced on Thursay 17 May 2012.

This employment is anticipated to generate approximately US$23.76 million of gross revenue for the minimum scheduled period of the charter.

The Company also announced that, through one of its wholly owned subsidiaries, it has completed the drawdown of US$34.65 million from its previously announced loan facility of US$82.6 million with The Export-Import Bank of China (“China Eximbank”) having a majority interest and DNB Bank ASA as agent. The purpose of this drawdown was to partially finance the acquisition cost of the m/v “Philadelphia”.

Including the newly-delivered m/v “Philadelphia”, Diana Shipping Inc.’s fleet currently consists of 28 dry bulk carriers (17 Panamax, 1 Post-Panamax, 8 Capesize and 2 Newcastlemax), as well as two new-building Ice Class Panamax vessels expected to be delivered to the Company during the fourth quarter of 2013. As of today, the combined carrying capacity of our current fleet, excluding the two vessels not yet delivered, is approximately 3.2 million dwt with a weighted average age of 5.75 years.  A table describing the current Diana Shipping Inc. fleet can be found on the Company’s website, www.dianashippinginc.com. Information contained on the Company’s website does not constitute a part of this press release.