The Municipality of Thessaloniki hosts HELMEPA 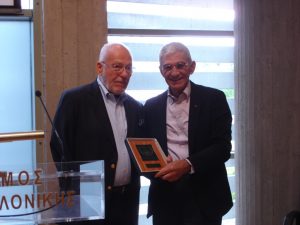 HELMEPA is continuing the implementation of the Association’s “Marine Environment and Sciences Awareness” campaign, which is supported by the UK-based independent charity Τhe Lloyd’s Register Educational Trust (The LRET), in Thessaloniki, Northern Greece between 16 and 29 May 2012.

On Wednesday 16 May, the Mayor Yiannis Boutaris inaugurated the environmental Exhibition of HELMEPA, which is hosted at the City Hall of Thessaloniki. “We wish to thank the Hellenic Marine Environment Protection Association for extending the campaign to include Thessaloniki” he said. “The Gulf of Thermaikos affects our city’s climatic conditions” he added “and our contribution is required to alleviate it from all types of pollution”.

The Director General of HELMEPA Dimitris C. Mitsatsos mentioned that the aim of the campaign is to raise awareness and nurture an environmental consciousness, especially amongst younger generations. The Country Marine Manager of Lloyd’s Register for Greece, Theodosis Stamatelos, talked about the aims of The LRET and the continuous efforts of shipping for the protection of the environment.

The following day, Thursday 17 May, in the Municipal Council Hall, the Vice Mayor for Environment, Costas Zervas, opened the Workshop of HELMEPA titled “Marine Litter: a problem that concerns us all”. He spoke about the actions of the Municipality for a cleaner Thermaikos Gulf and the contribution of HELMEPA’s campaign towards the environmental sensitization of citizens for cleaner seas and beaches.

The topic of marine litter in Greece and the Mediterranean region was presented at the Workshop by the Training Coordinator of HELMEPA, Mr. S. Volakis. He was followed by the Director of the Dept. for the Protection and Development of the Thermaikos Gulf of the General Secretariat of Macedonia-Thrace, Ms. N. Tsikoti, who spoke about the sources of pollution of the Thermaikos Gulf, while Mr. C. Comninos from the Local Authorities’ Association of Thessaloniki presented the topic of solid waste management in the wider region.

The protection of biodiversity in the National Park of the Axios-Loudias-Aliakmonas Rivers’ Delta was analyzed by the Head of Communications for the Managing Authority, Ms. E. Papadraga, while the important issue of solid waste management in the port of Thessaloniki was presented by the Head of the Environmental Dept. of the Port Authority of Thessaloniki, Ms. E. Vafaki.

The closing of the Workshop was done by the Mayor of Thessaloniki, who stressed the need to change the waste management system and assign duties for the sustainable management of coastal areas to Local Authorities, in which case the Municipality of Thessaloniki will become an example of a sustainable city. Presenting the Mayor with the Association’s emblem, the Director General of HELMEPA wished every success to the efforts of local stakeholders, so that the Thermaikos Gulf provides Thessaloniki with the environment promised by nature.

The Exhibition will be visited by 1, 200 pupils of local Primary Schools, while it will remain open to the general public every day (17:30-19:30). In parallel, activities in schools are also taking place and began on Friday 18 May at the 19th Primary School of Thessaloniki with an environmental presentation by HELMEPA staff and the participation of schoolchildren in recycling activities in class.

The LRET is an independent charity working to achieve advances in transportation, science, engineering and technology education, training and research worldwide for the benefit of all.