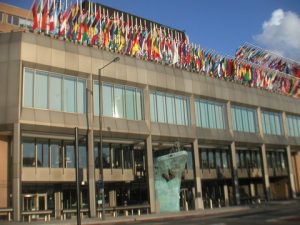 Recommended interim measures aimed at enhancing the safety of passenger ships, in the wake of the Costa Concordia incident in January, were agreed by IMO’s Maritime Safety Committee (MSC), when it met at the Organization’s London Headquarters for its 90th session from 16 to 25 May 2012.

The MSC adopted a resolution, which invites Member States to recommend that passenger ship companies conduct a review of operational safety measures, to ships flying their flag, on a voluntary basis and “with all possible urgency and efficiency”, taking into consideration the recommended interim operational measures listed in an MSC circular.

The recommended interim measures include:

• carrying additional lifejackets, to be readily accessible in public spaces, at the muster/assembly stations, on deck or in lifeboats, so that in the event of an emergency passengers need not return to their cabins to retrieve the lifejacket stored there;

• reviewing the adequacy of the dissemination and communication of the emergency instructions on board ships;

• carrying out the muster for embarking passengers prior to departure from every port of embarkation, if the duration is 24 hours or more;

• limiting access to the bridge to those with operational or operationally related functions, during any period of restricted manoeuvring, or while manoeuvring in conditions that the master or company bridge procedures/policy deems to require increased vigilance (e.g. arrival/departure from port, heavy traffic, poor visibility);  and

The adoption of the resolution followed consideration of information provided by the Government of Italy on the investigation into the Costa Concordia incident, as well as preliminary proposals on enhancing the safety of passenger ships brought to the Committee’s attention by the Government of Italy and other Member States, as well as by the Cruise Industry Operational Safety Review.

The resolution encourages “Member States and the passenger ship industry to take the necessary actions to ensure that their current safety standards, procedures and best management practices are fully and effectively implemented”.

The MSC also agreed, in principle, to an action plan on long-term work for passenger ship safety, pending the review of the report of investigation into the loss of the Costa Concordia.

IMO Secretary-General Koji Sekimizu welcomed the “appropriate and timely actions in response to the loss of the Costa Concordia”.

The MSC also approved, for adoption at MSC 91, new draft SOLAS requirements (new regulation III/17-1) to require ships to have plans and procedures to recover persons from the water, as well as related Guidelines for development of plans and procedures for recovery of persons from the water. The MSC also approved a draft MSC resolution on Implementation of SOLAS regulation III/17-1 to ships other than those engaged in international voyages.

International Day for the Fight against Illegal, Unreported...