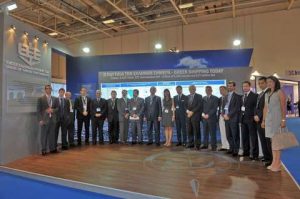 The delegation of the UGS

A strong delegation of the Union of Greek Shipowners (UGS) led by Chairman Theodore Veniamis visited the 23rd Posidonia Exhibition today where they met with many decision makers from the global marine community who converged to Athens once again to participate at the world’s biggest shipping trade event.

The UGS members visited major exhibitors across the vast four halls of the 60, 000 square-metres Metropolitan Expo and met with representatives from Far Eastern, US and European shipbuilders, marine equipment suppliers and classification societies.

“This is the best and biggest Posidonia ever with more than 1, 800 exhibitors from almost 90 countries. The event’s success and global appeal sends a strong message to the Greek and international communities that Greece was, is and will always be the homeport of global shipping, which in turn provides the platform for the most important mode of transport for worldwide trade, ” said Veniamis.

Some of the UGS members were escorted by their off-springs, in a symbolic move that signifies the continuation of the long Greek shipping heritage and sends a strong message of the new generations’ commitment to the country’s shipping industry.

“Shipping is the healthiest national economic activity and like Posidonia the thoroughbred achievement of the private and proprietary entrepreneurial business model. This event has grown from strength to strength since its inception more than 40 years ago and it has contributed to the very positive image Greek shipping enjoys all over the world, ” said former UGS president Ioannis Lyras who is also the Chairman of the Posidonia Coordinating Committee.

UGS Vice President Michael Chandris also expressed his admiration for Posidonia describing it as a globally renowned institution for the world’s seafaring nations.