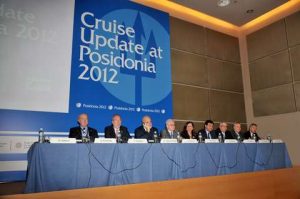 (Athens, 6 June 2012) Senior representatives of the European Cruise Council (ECC) told the Posidonia Forum, meeting in Athens today, that the growth of the cruise sector in Greece is being maintained, despite the difficult economic climate.

ECC Chairman, Manfredi Lefebvre D’Ovidio and Chairman of the ECC Port Sub-Committee, Neil Palomba, both warned of significant potential obstacles and challenges that could seriously threaten the steady growth of the sector, but added that incentives could help the cruise industry play a key role in the economic recovery of the country.

The ECC Chairman told the Forum that Greece is “a key cruise destination in Europe”, with some 4.7 million passengers arriving at Greek ports, 17% of the total European market, ranking third in Europe, only behind Italy and Spain.  Passenger expenditure in Greece is some €470 million and direct cruise industry expenditure – passenger and cruise purchases, shipbuilding, employee compensation, cruise line purchases amounts to €14 billion across Europe, and close to €600mn in Greece.

ECC Chairman, Manfredi Lefebvre D’Ovidio said: “These impressive figures clearly show the social and economic importance of the cruise sector both to Europe generally and to Greece in particular. However, there are significant potential obstacles to our future growth, and we face some challenging years that could seriously threaten the steady growth the sector has experienced over the last decade.”

Those challenges include: the continuing economic down turn in Europe; the need to rebuild the industry’s reputation with the public post Concordia; the impact on cruise operations of political upheavals like those experienced in North Africa and the Middle East; the current volatility of fuel costs and the significant increase in fuel prices as from 2015 as a result of the introduction of international and EU legislation.

He continued: “Despite this challenging environment there are good reasons to believe that we will come through this period of uncertainty in a strong position.  While its natural beauty, climate and unique cultural heritage has made Greece into one of the top cruise destinations in Europe, there is clearly considerable potential for the growth of cruise tourism in Greece, with the country becoming a regional hub for cruising.”

Neil Palomba, Chairman of the ECC Port Sub-Committee, also spoke of the “huge potential of the region for the cruise industry today”, but addressed the need for a period of stability and the tackling of “outstanding practical issues currently hampering cruise operations in Greece” in order to realise the potential.”

He drew attention to the “key issues that could threaten the industry’s development and have a strongly negative impact on both cruise tourism in Greece and the wider Greek economy.”

These key issues include: cabotage legislation; ports infrastructure; fees and charges; safety measures; a common cruise port policy, and above all a berth allocation system.

On the need for a new berth allocation system he said: “In many Greek ports, berth assignments follow a ‘first come first served’ basis. This is neither an acceptable nor a viable approach. Cruise lines plan their itineraries three years in advance and need clear berth booking and confirmation rules to be set and respected.”

He added: “We are keen to fully engage in technical round table discussions and consultations to let cruise tourism keep growing and play its part in the Greek economy’s recovery.”

He concluded: “European ports, ports associations, terminal operators, ministers of shipping and tourism, and local Chambers of Commerce should step up to the task of creating a more competitive environment in Europe. I do not have to remind you that cruise lines bring wealth to the destinations they visit, not to mention invaluable marketing exposure. Incentives are needed today to promote these ports of call to cruise lines. Let’s seize the day!”

Please find the link to the ECC’s website where the speeches are available: