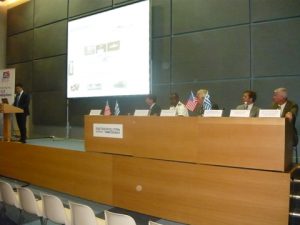 Dr. Grigorios Koutsogiannis at the podium with the panel on his right

Piracy has unfortunately “become” a way of life and combating same near the coast lines as well as in the high seas attracts the daily interest in all news bulletins!  Not only ways of combating pirates but services too have entered our lives and have put people at risk, in particular crew members in many parts of the globe, with the Somali Coast and the entire Indian Ocean becoming the field of an unusual confrontation…  Elena Kritikou reports:

Many seminars, conferences and fora on Piracy take place nearly every day – Posidonia 2012 not excluded.  Last Tuesday at a full house at the seminar room of Metropolitan Expo in Athens, a unique gathering took place meticulous organized by the U.S Commercial Service of the US Embassy in Athens (as we advised you back on May 17th) at no better time and it was a chance to hear specialists in the field from major international entities as well as a chance in question time to have your say! Amazingly, all guests where there at 14:45 hours – on the dot!

The opening remarks by David McNeil, the Commercial Counselor, U.S Embassy Athens who passed the torch on to Daniel B. Smith, the U.S Ambassador for the Welcome remarks.  Then come Antonios Faraklas, the President of the International Propeller Club, Port of Piraeus, partly sponsors of seminar. Faraklas who runs Chartworld, a major shipping company, underlined the extension of the phenomenon during the last years and the great increase in the loss of many seafarers life. Unfortunately, at least one of his company ships become a victim of Piracy, hence his remarks.

Dr. Grigorios Koutsogiannis CEng, Business Development Manager NATO & Europe from Lockheed Martin* was the first to take the podium. He stressed the fact that the busiest maritime route (Gulf of Aden, Indian Ocean) is not safe enough. He proposed the creation of a network of trust so that the quick share of information will be feasible. Another hint was to upgrade the monitoring system within the vessel which will lead to a four times quicker reaction of the crew.

Jonathan E. McConnell, CEO of Meridian Global Consulting told the audience about his company and how same provides highly trained and experienced personnel who offer scalable risk mitigation solutions all while at a reasonable cost. He also underlined that Meridian focuses on the seafarer’s safety and assured the delegates that pirate attacks always fail when a guard team is on board.

The last speaker was Rick Whittington, Director of international sales from Sirchie*** Fingerprint Laboratories, who explained the high quality products hey manufacture and how same are used by law enforcement agencies around the world to identify, collect, record, analyze and archive physical evidence.

The seminar closed with many interesting questions from the audience, one being that of Rt. Adm (HN) John Theofanides who stressed that the discussion and conversely the speakers focused on technology but not for the daring pirates’ new tactics and use of high technology equipment for their benefit which today they can found in the open market! 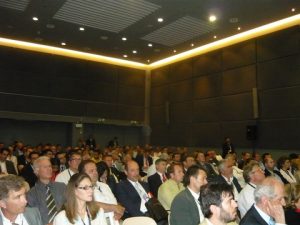 This is what I call a full house!

We will soon have all the speakers’ presentations so as you can have them and comment in detail.

***Sirchie is a comprehensive manufacturer of the highest quality crime scene investigation and forensics evidence collection supplies. We can understand the reason for the participation of Sirchie to the seminar if we admit that an attacked ship is treated like a crime scene.