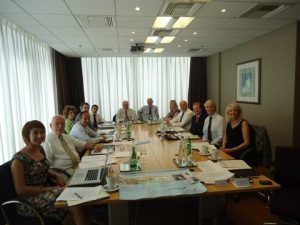 Against the backdrop of Posidonia 2012, members of the INTERMEPA Steering Committee (SC) met today Thursday 7 of June in Athens, Greece over a working lunch to discuss important issues on the international MEPA agenda.

Member MEPAs represented were from AUSMEPA (Australia), CYMEPA (Cyprus), HELMEPA (Greece), NAMEPA (U.S.A.), and TURMEPA (Turkey). Addressing the SC on behalf of outgoing Chairman, Mr Yaramanci of TURMEPA, Mr Jonathan Beard (TURMEPA Treasurer) commented on the efforts of the Chairmanship during their 2-year tenure, suggesting certain items to be considered in the future.

Speaking to the committee for the first time as Chairman, Mr. Tsavliris expressed his conviction that the most effective catalyst for the important work of INTERMEPA is the continued synergy between member MEPAs. He continued in stressing that it is through encouragement rather than inducement that this can be achieved.

Deliberations centered around the proliferation of the voluntary MEPA spirit to other countries. Current cooperative initiatives were evaluated together with the potential to further extend collaboration between MEPAs through uniform campaigns to activate and unite the global community in the fight against marine pollution. Members of the SC took the floor in turn to present their individual MEPA progress and future directions.

Proceedings concluded with the delineation of the date of the next convening of the SC in early 2013 in Singapore and members left the successful meeting confident that the essence of INTERMEPA would endure.

The sea gets sick but never dies