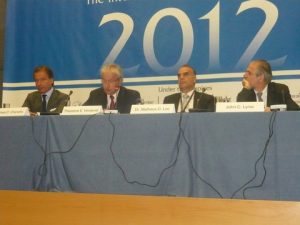 The policies and strategy of Greek shipping will not be impacted by the outcome of the upcoming elections and, in spite of the challenges facing the country, the sector’s prospects are secure and commitment to Greece a given, said Theodore Veniamis, Chairman of the Union of Greek Shipowners, during the traditional UGS press conference of Posidonia, the world’s biggest shipping event held biennially in Greece.

“We want a competitive Greek shipping industry underpinned by a strong Greek flag which promotes the country’s interests. We want to have more Greek seafarers in our fleets and this has been one of the perennial issues which have been facing Greek shipowners since 1932, ” said Veniamis.

“Why are we not in the position to allow private initiatives to develop educational shipping institutions in order to increase the number of students and seafarers for the Greek ships in a country which is famous the world over for its seamanship and long maritime tradition?”, he wondered.

“Today we are here at Posidonia where more than 1, 800 companies from 87 countries have come because they respect Greece’s leadership in the shipping industry. Heads of state, ministers, decision-makers of major corporations are here because of our long marine heritage and market dominance which we want to maintain. This is the best recognition for Greece and for us because the congratulations belong to our country and for our country we are proud and we feel confident that next Posidonia will be even bigger and better, ” said Veniamis.

Posidonia 2012 set historic records in visitor numbers with the unofficial figure exceeding the 18, 000 mark spread across the four days of the event which was inaugurated by Greek Prime Minister on Monday evening and culminated today.

“We estimate a 10 per cent overall increase in visitor numbers, ” said Theodore Vokos, Project Director, Posidonia Exhibitions, S.A. “This achievement can be mainly attributed to shift to the new state-of-the-art Metropolitan Expo venue and the comprehensive programme of specialist seminars and conferences which tackled key shipping issues from piracy to shipbuilding and fleet finance and topics around the prospects of the Greek cruise industry.

“Forward bookings already look strong as this year’s unprecedented success compelled many exhibitors to submit participation enquiries and we are very confident that next year we will grow beyond the 45, 000 square metres which was this year’s floor space, ” said Vokos. Major companies and organizations from the USA, Far East and Europe have already committed their presence in next year’s event which is scheduled from 2-6 June 2014. 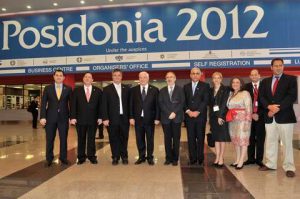 fourth from the left is the Panamanian President Ricardo Martinelli, next to him is John C. Lyras form the UGS and seventh H.E Felica Dishka Papadimitriu Ambassador and Consul of Panama in Greece together with members of the Panamanian delegation and Theodore Voko, s Project Manager of Posidonia

The massive appeal of Posidonia, which was today visited by the President of Panama, Ricardo Martinelli, a significant shipping nation, is reflected in the comments of some of this year’s exhibitors.

“The move to the Metropolitan Expo has been a very wise decision on behalf of the organization as it offers an increased and wider variety of facilities that are integral for the implementation of a corporate exhibition.  We witnessed a huge wave of visitors which gave us the opportunity to see some of our long established clients both from Greece and abroad as well as a plethora of new clients that showed deep interest into our software services. For us, Posidonia is a unique opportunity to strengthen our relations with our existing customers and create new contacts that will hopefully evolve into new business deals, ” said Panagiotis Nomikos, Business Development Director of Danaos Management Consultants SA.

Eliza Neophytou Nicolaides, Maritime Marine Officer of the Cypriot Ministry of Communications and Works, Department of Merchant Shipping, was also full of praise for Posidonia 2012: “Our participation has been fascinating. I am deeply satisfied with the new exhibition venue which offers an upgraded experience both to visitors and exhibitors but primarily because of the increased mobility around our pavilion.”

International exhibitors were also not short of positive comments for the organization of the event and the new facilities. According to Charles Axisa, Marketing & Communications Manager of Transport Malta the island-nation’s presence at Posidonia this year was hugely successful:  “Malta’s presence at Posidonia Exhibition is long and well established. We are very proud to be part of the world’s largest shipping exhibition for yet another year and enjoy the premium facilities and benefits offered by the new venue. Malta, like Greece, Cyprus and other countries, is a maritime nation with great history and tradition and a wide variety of related industries that support our economy. Our Posidonia participation was designed to promote “Maritime Malta” and by that I mean the wide spectrum of naval activities currently flourishing in our country and we certainly achieved our objective”.