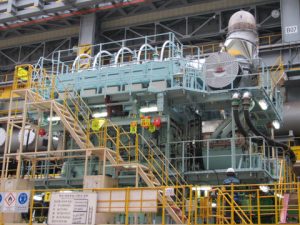 Wärtsilä, the marine industry’s leading solutions and services provider, has successfully tested its first Wärtsilä RT-flex50 version D engine with a turbocharger (TC) installed on the driving end side. With the addition of this engine, Wärtsilä now has an additional 2-stroke engine that can be fitted to smaller vessel types. The derated engine runs on lower rpm’s and features reduced fuel consumption, thereby enabling lower emission values to be achieved – including smokeless operation, especially at low engine load.

The RT-flex50 version D engine with turbocharger on the driving end side expands the possible applications of Wärtsilä 2-stroke engines with 50 cm cylinder bore for new vessel constructions.

Due to its narrow design, the new engine version will be used for ship designs with slim stern sections where the current standard execution, with turbochargers mounted on the exhaust engine side, does not fit. The RT-flex50 version D can now be used instead of other engine types featuring a smaller cylinder bore and higher speed. In many cases the higher performance of the cylinders allows the use of one less cylinder and can, for example, reduce maintenance costs. Thanks to the low speed of the engine and propeller, the total fuel consumption of the vessel is considerably reduced.

The Wärtsilä RT-flex50 is a low speed, 2-stroke engine with fully electronic control of the exhaust valve activation and fuel injection. It is designed to operate on a wide range of fuels, from marine diesel oil (MDO) to heavy fuel oil (HFO), of different qualities.

The TC on the new engine is positioned directly above the fly wheel at the driving end of the engine to save space. Typical applications would be in small bulker and tanker vessels, ‘handysize’ and container vessels, and feeder ships.

Most engine components for the existing RT-flex50 version D TC exhaust side and the new RT-flex50 version D with TC on the driving end side, are the same. This makes the new product attractive for owners with RT-flex50 type engines already in their fleet, since there is a commonality of spare parts.

Testing of the engine took place at Wärtsilä’s licensee Hyundai Heavy Industries in South Korea, and was completed in April 2012

Novel propulsion arrangement by Wärtsilä and RINA can...