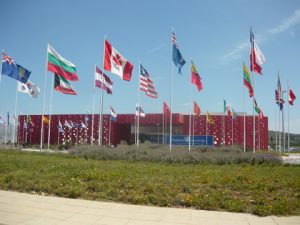 TradeWinds Shipowners Forum, the keynote conference of this year’s Posidonia Exhibition, drew a full house of delegates to hear leading shipowners and other top industry figures discussing burning industry issues of the moment. Except the text that you read herebelow, we bring you live parts of the proceedings of this super event, excellently contacted by the moderator Sylvia Klimaki and the Julian Bray’s experienced introduction/boost of the second part of the event. Julian Bray is the Editor-in-Chief of TradeWinds. Martin Stopford**, shipping market’s guru for many many years was there too and I guess his presence triggered a lot of interest from delegates and members of the press and media. See also his billion dollar question…in other reporting coming soon in this site. We all wait Martin’s from ships to sheeps project, and why not… 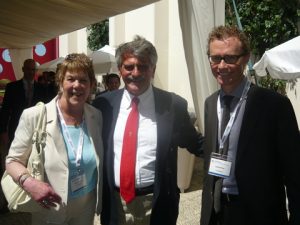 Lending a positive slant to the current uncertain situation, owners said they believe this is a good time for expansion.

“We are in the best opportunity the shipping space has seen since the mid-1980s, ” said Morten Arntzen, chief executive of Overseas Shipholding Group (OSG).

Arntzen revealed that the OSG has hired an additional 30 staff in its Athens office and will operate 80 ships out of Greece.

Angeliki Frangou, CEO of Navios Maritime Holdings believed the key to success is “to have a conservative balance sheet and have enough liquidity.” 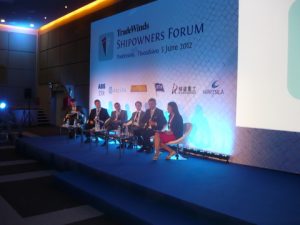 If a purchase makes sense today, then “you will be very happy later on.”

Evangelos Marinakis of Capital Product Partners told delegates that for the next two or three years his company would be able to capitalise on opportunities, while Peter Weernink of Geneva-based SwissMarine Services revealed that after acquiring its first vessels last year, his company is actively considering buying further ships in the secondhand market to complement its huge chartered-in fleet.

But financing, especially for small and medium-size owners, may prove difficult, speakers said. 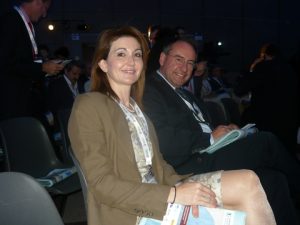 Harald Serck-Hanssen, global head of shipping and offshore at DNB, said there would be enough debt financing for good shipowners with banks that are still in the business, “but small to medium-size owners will struggle to find finance. That will over time change the landscape, particularly here in Greece, ” he said.

“You will need a range of finance sources as banking is contracting and will again next year, ” he said. 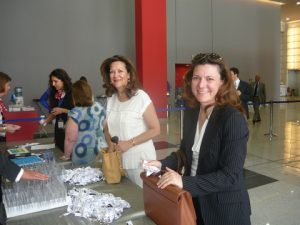 “Even export credit agencies tend to favour big owners over the smaller owners, ” he said.

Another hot topic these days is the introduction of fuel-efficient, environment-friendly ship designs.

While Niels Bjørn Mortensen of Maersk Maritime Technology and Christopher Wiernicki of ABS both pointed to increasing bunker costs and increasing regulatory pressures as the most significant drivers for new technology as they laid out the pros and cons of the new designs, shipowners were lukewarm in their reception of such eco-ships. 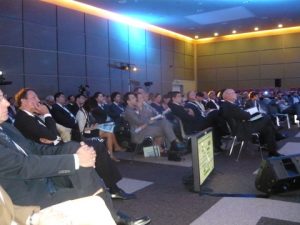 A full house inside…

“I have serious doubts about the new technology. We have to be cautious and see how these vessels will perform over a year, in rough seas and monitor them, said Marinakis. Quite a few, amongst them John Faraclas from allaboutshipping endorsed this crucial issue by putting forward a respective question.

Frangou and Economou were also unconvinced of the benefits of the new ship designs, while Arntzen was more critical than all.

Lashing out at shipyards for producing new ship designs that they are marketing cheaper than the conventional vessels at a time when oversupply is plaguing the market, Arntzen said owners are in effect being asked to subsidize shipyards and brokers. 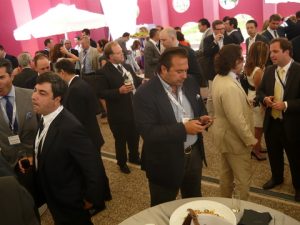 …as well as outside, with George D. Gourdomichalis at centre stage

More than 400 delegates from around the world, but with a strong representation of Greek shipowners attended the Forum, which will be the feature of Posidonia for the coming years. Who wasn’t there: Leon Patitsas, Elena Athoussaki, Sadan Kaptanoglou, Harry J. Fafalios, the GSCC Chiarman,  Konstanitinos Kounadis with Peggy Papastavrou from ASE, George Alexandratos, Nana Kazis, Eurobulks’ Pantelis Pittas, GAC’s Nikos Marmatsouris with Maria Angelidou, Debbie Foros-Tsirozides, Fotini Karamanli from Hellenic Carriers, Jean Richards from Quantum Shipping Services in London – she wouldn’t have missed such an event, Despina Ragia-Pateras from SG Hambros Bank, Maria Kouliga-Pavlou from Trinity Marine Services, Manoli Vordonis – former head of Thenamaris, Dimitri Patrikios from Springfield Shipping, NAMEPA’s Carleen Lyden-Kluss,  Richard Greiner and Kathy Kennedy from Moore Stephens, Miki Capaitzis and Jenny Pournaras from PAMA, Navigator’s Danae Bezantakos, George and Stathis D. Gourdomichalis, Nicky A. Pappadakis and Karen Kokabi from A.G.Pappadakis, The Angelakos’ and Mylonas…’ enblock and The Vergos’ en mass… and many many others! 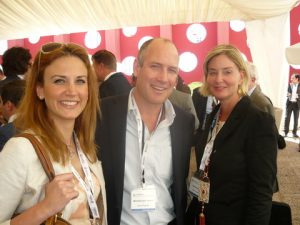 Over a dozen questions and three points including a statement where heard and more or less appropriate replies were given!

Worth mentioning the sponsors too: ABS, aspida maritime security, Capital Product Partners, DTA, Rongshseng and Wartsila acting as the welcome partner, as well as the supporters: WISTA-Hellas, The Hellenic Shipbrokers Association, The Association of Banking and Finance Executives of Hellenic Shipping, The Young Shipping Professionals and the Piraeus Association for Maritime Arbitration.

Moreover we have a video with some parts of the event and views of delegates. Viewers can log on, watch and tell us their view.

NHST Events global reach extends to the most traditional and the most dynamic shipping centres of the world, with events now running in Shanghai, Mumbai, Singapore, Geneva, Athens, Oslo, Istanbul and London.

NHST Events AS is part of the Norwegian news organisation NHST Media Group with operational headquarters in London.

*Report compiled by John Faraclas and Lilian Evgenides with the support of NHST Events and their news advise bulletin.