Artist Bobbie Russon talks about her new show at a gallery in the city of Bath. By Jane Hill

For an only child, with a claustrophobic home life, the element of water represented release for artist Bobbie Russon.  “Growing up in cities there has been a need to escape to the sea, to breathe and take in the expanse and unending horizon, ” she has said.  Bobbie creates environments that shrink or expand, and she has been heading for Cornwall for 30 years, entranced by its particular quality of light.

Though she now lives on dry land, she had been a river dweller on a barge moored alongside Eel Pie Island on the Thames.  Her partner, who was at one time a fisherman on a Scottish trawler and is now a boat builder, worked on the royal barge Gloriana which led the Jubilee pageant behind the belfry boat (see https://allaboutshipping.co.uk/2012/06/11/4876/), and on the river at Richmond, the couple keep a small craft called  Amity.

Are You Thinking What I’m Thinking, Oil on linen, Copyright Bobbie Russon

She has said of  her work The Last Day, “once in a while I feel the need to paint like the sea makes me feel, big skies, freedom and light, like taking a deep breath of salty air after being cooped up.”   And this is a development, lifted as it is by lucidity and transparency of tone.  She describes her tastes: “Most of the work I like has a quietness, whether it’s Rachel Whiteread’s House or a Gwen John.”

Pictures that excite a visceral response win disciples and Bobbie Russon is ambitious for her brooding paintings.  This hermetic work is bringing something new to the world of image making.

Unspoken, her second solo show at the gallery bo-lee in Bath, Somerset, reintroduces Bobbie Russon as ‘midwife’ to a family of solitary girls.  These witty paintings, picturing the antics of a bored, inventive child, are poetic bombs.  Bobbie is expert at remembering unuttered thoughts, epiphanic moments. The work evolves as the pearl that is created when a grain of sand aggravates the oyster. “If I can evoke a memory or emotion in a stranger by my own interpretation of a private experience, without having to use words, then I feel I am succeeding.”

She might be musing on the maxim ‘Four legs good, two legs bad’ instilled by the pigs in Animal Farm, when she says: “The silent presence of the animal makes the loneliness of the person more acute.

“My paintings are a combination of how I felt as a child, together with feeling for others, be they in stories from the 1800s or the girl down the road today who cannot mix with others due to her parents’ religious beliefs.”  In Having a Jane Eyre Day, her changeling joins the mythology of childhood.

Titles are emotive. Are You Thinking What I’m Thinking, Learning Curve, Out of Step, Alone Together, Poker Face, all have her child testing parameters. She is marvellous at expressions, startlement, insolence, the mischievous glint.

On the larger painting, paint streams down like coloured rain.  “I like to work with materials that can be reworked, ” she explains. “I find a joy in using oil paint, as it encourages experimentation, with the chance of happy accidents; it can be used thick or thin, blended, dripped and scraped.”  The materials are not exclusively paint. “I use tea as I like the discolouration it lends and also the way the line bleeds and becomes more fluid. I like to see something of the artist in work, a human element rather than perfection.” 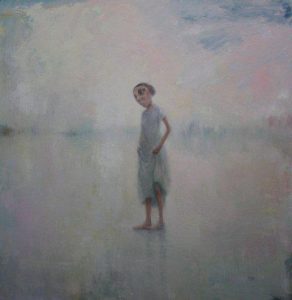 Imagination can be as powerful a truth as truth itself and when adults are imaginatively playful perhaps it is because they were serious children?  Her drawings and hand written notes (‘Veneer of lies, behind the veneer a glimpse of truth’) pinned to the studio walls, are triggers for paintings.

Bobbie Russon’s mother was an illustrator in the 1960s, and drawing satisfied a need for the excruciatingly shy daughter, raised in Birmingham and minded by grandparents in rural Herefordshire.  A note-to-self pinned to the studio wall poses the question Nature or Nurture?  “My mother was a hippy and open minded, as were my grandparents. I spent much time in the summer barefoot, playing in the street. The restrictive clothing and tight lipped girls that I paint stem from the restriction I felt being an only child, growing up in a one parent household, very intense…”

The people and geography of her life were intimately related; subjects recall her grandparents’ cottage in a wooded valley with all its attendant wildlife, the grazers and the enigmatic hares, Lady-of-the-Lake style fish pools and her grandmother’s tales of witches.

The birth of Bobbie’s first child in 1998 resulted in a hiatus whilst she constructed a world of iced gingerbread and toadstools. Now working out of a studio built by her partner, she is is revelling in the transcendence of making painting the important business of life.

Some of her work is the painterly equivalent of a film made by David Lynch crossed with an Ealing comedy; it has a baffling, entrancing quality.  Her enthusiasm for Marcelle Hanselaar’s  “extremely dark etchings” comes as no surprise, they can both imagine what they might find in Bluebeard’s Room; likewise the books on Bobbie’s shelves, including Blasphemy: Art that Offends a survey of the relationship between religion, politics and art; and the photographs of Sally Mann: art that stimulates debate.

Russon studied foundation at Bournville School of Art, spending a summer at Highfield House, the centre of Birmingham’s ‘alternative Bloomsbury’, making the subject for her thesis the murals painted by Joan Souter Robertson, before coming to London for a BA at Saint Martin’s and an MA at the Royal College of Art. She had her first solo show in 1994 at Merz Contemporary Art.  She showed at the Roy Miles Gallery in Bruton Street, the Young Contemporaries at Frost & Reed, St James’s, and had a residency  at the Florence Trust studios in Highbury.

It takes courage to be uncompromisingly revelatory and the paintings of Bobbie Russon bring us as near to being inside an artist’s head as can be.  The consequence is a painter of unusual beauties and harmonies. 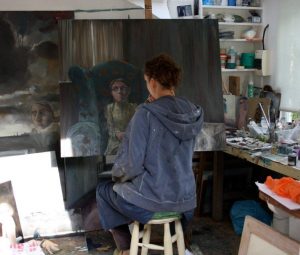 Unspoken, a solo show by Bobbie Russon, is at the bo-lee gallery, Bath, from June 25-July 21. http://www.bo-lee.co.uk/exhibitions/unspoken-bobbie-russon/.

The Private View takes place in Bath, this evening, 6-8pm.

This Painter is exceptionally talented – the work combines technical skill but far more importantly that unique blend of the dreamlike and the mythical …… plaintive and dramatic all in one , the Paintings have such a rich sense of authenticity and ‘knowing’ yet the viewer can also place their own narratives and emotions into the paintings – a rare thing.