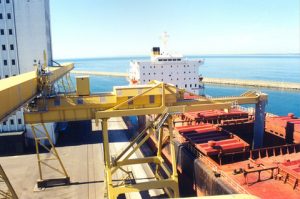 A new grain-handling terminal being built by Newcastle Agri Terminal Pty Ltd, in New South Wales, Australia, will feature a Siwertell SBL 1600 TTL ship loader from Cargotec. The systemis planned for delivery in March 2013 and will load ships up to Panamaxsize.

Cargotec’s scope of supply also includes a cascade chute for the shiploader and a 182m-long enclosed jetty belt-conveyor with tipper, which, in combination with the ship loader, will ensure the dust-free transfer of grain from the terminal at a rated capacity of 2, 000t/h.

“The owner needed a tailored solution to fit an existing berth, ” explained Bertil Andersson, Sales Manager, Bulk Terminals. “We were able to provide this, along with the reassurance that we have a well-known and reliable reputation for delivering numerous loaders of this type. Our Siwertell technology also provides an environmentally-friendly solution for the terminal, which will fit well with its planned efficiency and environmental standards.”

He added: “Initially the system has been designed to handle grain, but its inherent flexibility will also allow the operator to load flour in the future.”

GL releases GL Crew Manager: Get ready for the MLC 2006