The House on Paradise Street

Following her first two acclaimed works of non-fiction, Eurydice Street: a place in Athens and Red Princess:  a Revolutionary life,   Sofka Zinovieff’s presented her new epic The House on Paradise Street I bet you will break all records.

In 2008 Antigone Perifanis returns to her old family home in Athens after 60 years in exile. She has come to attend the funeral of her only son, Nikitas, who was born in prison, and whom she has not seen since she left him as a baby.

Nikitas had been distressed in the days before his death and, curious to find out why, his English widow Maud starts to investigate his complicated past. In doing so, she reignites a bitter family feud, and discovers a heart-breaking story of a young mother caught up in the political tides of the Greek Civil War and forced to make a terrible decision that would blight not only her life but that of future generations…

The House on Paradise Street is an epic tale of love and loss, which takes readers from war-torn streets of Nazi-occupied Athens through the military junta years and on into the troubled city of recent times – and shows what happens when ideology threatens to subsume our sense of humanity.

Sofka was introduced by Dr. Victoria Solomonidou, the Cultural Attaché at the Greek Embassy in London, a very touchy introduction and the event was organised by the Press Office of the Greek embassy in London and Short Books at the Friends Room of London’s Hellenic Centre; a lively discussion with drinks and dips followed, lasting for over an hour as the author, by signing books, gave us enough time to contemplate and have high level intellectual discussion!

The book, except the story itself  – as is being read on BBC Radio 4, is meticulously organised to allow the reader learn a bit about modern Greece following the liberation from the Ottoman Yoke. It is important to start from the…end and read about Greece in the relevant chapter, as a Nation’s too complicated history, cannot be explained in any book, and particularly to this one’s contents. Given the current developments and those to come in Greece, following the despicable situation Greeks and collaterally the world lives, this is a must book to read! 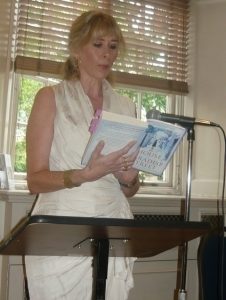