LNG is the first step towards carbon neutral shipping 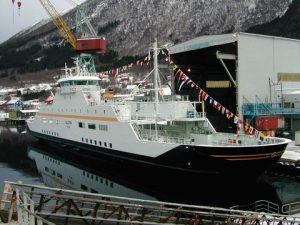 Glutra – the first LNG fuelled ship in the world

3  July 2012 – In 1996, the Norwegian Government decided they wanted domestic ships in Norway to run on natural gas, and four years later the passenger ferry Glutra was launched as the worlds first LNG fuelled ship. The motivation behind this drive was not to reduce emissions of CO2 or GHG, it was to improve air quality and reduce sour rain, in other words it was to reduce emissions of local pollutants. CO2 and GHG was not even on the agenda.

The same motivation has been the underlying driving factor for the development of MARPOL Annex 6, concerning emissions to air from ships: specifically, one main focus is on reducing the emissions of SOx and NOx, and LNG has been developed as one option for compliance with these new requirements.

More recently, the focus has been swinging towards global emissions, also for the shipping industry. As it should in a world with increasing concerns about climate change. From a regulatory perspective, the only concrete things that have developed are the EEDI and SEEMP schemes, but they both concern themselves with energy efficiency, not with a fundamental change of how the industry propel their ships. Admittedly, the shipping industry displays vast opportunities for efficiency improvements, but this is not enough to meet future global emissions targets. The industry needs to take a more aggressive approach.

Unlike most other industries, though, the shipping industry has no carbon neutral alternatives even worth discussing. For land based power production, you can at least spend your time discussing wind, solar, biomass, and nuclear. For land based transportation you may discuss electric drivetrains, which potentially may become clean if the source of electricity is clean. But for shipping, these alternatives dont apply. If you were to go electric, you would have to fill the entire cargo area with batteries. If you were to go for bio based solutions, you would have to vacuum the world for organic material. A ship doesnt have enough surface area for solar to make sense, and it doesnt have enough stability to carry wind turbines on deck. Sails? sure, if we want to go back to accepting half year voyages at 8 knots in whatever direction the wind is blowing.

The best option shipping has for contributing to global emissions reductions, is to switch to natural gas. This will cut about 25% of CO2-equivalent emissions. This reduction, however, has recently been disputed from two angles; the methane slip in internal combustion engines, i.e. methane slipping unburnt through the engine, and the methane leakages along the natural gas value chain. The first has already been optimized by the engine suppliers to where it can be considered a minor issue. But the latter is much more difficult to quantify, as it depends largely on the source of natural gas and its production methods. Several studies indicate that there is still clear advantage for natural gas, but the message is clear: Switching to natural gas will not contribute much to reducing global emissions. At least not directly.

Natural gas is primarily methane, and methane is a potential gas for use in fuel cells. So once you already have methane onboard ships, this opens the door for more widespread testing and development of large scale fuel cells. The LNG fuelled offshore supply vessel Viking Lady has already supplied part of its auxiliary power demand with a fuel cell. As the fleet of LNG fuelled ships grows every one of them will become a potential customer for fuel cell suppliers, and hopefully this will speed up development. From a climate perspective, this will mean a 50% reduction in CO2 emissions.

Further, a key benefit of fuel cells is that they can run on various gases. And in the future we may have access to carbon neutral gases. Hydrogen from artificial leafs, or from algae feedstock, are examples of solutions being explored, and if that doesnt work out we can easily generate carbon neutral hydrogen from nuclear reactors. In other words, by implementing LNG fuelled ships today, we effectively open the road towards carbon neutral shipping.

It is the right thing to do. And there are no other plausible alternatives based on presently known and expected technologies.

Fugro and NYK team up with OYO Corporation...