This exhibition of rare photographs and printed material from the archives of the Benaki Museum, the National Historical Museum of Greece, the Genadios Library in Athens and the Lampakis Family Archives and the unique catalogue that was produced to include them, was presented at the Great Hall of London’s Hellenic Centre last Monday, comes at no better time – with the London Olympics just few weeks away! John Faraclas was there with his camera: 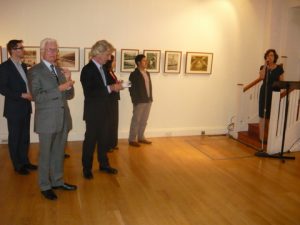 Despite the odd rain which “produced” a new record for rainfall over the last 152 years, a couple of hundred (!) of faithful turned up for the private view. After Mrs. Agatha Kalisperas’ “rituals” and introductions, Stamos J. Fafalios took to the podium and delivered a powerful and emotional short speech inviting the guest of honour, Sir Michael Llewellyn-Smith* CMG, KCVO to open the exhibition! Sir Michael, a former British Ambassador to Athens (1996-1999) – who was also there serving in the mid-sixties, was emphatic in his short but well construed speech. 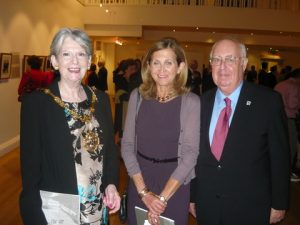 As one cannot have the ability to acquire the exhibited photographs and printed material, the catalogue produced is superb! Worth mentioning all those involved in this exhibition: The Exhibition Curators: Stamos J. Fafalios and Aliki Tsirgialou; Fafalios was also the Catalogues Editor; the catalogue’s designer Bob Studio in London; the printing by the Kontorousis Bros in Athens; the Publishers, the Hellenic Centre, the Benaki Mueseum and the Lampakis Family Archives, the excellent texts by Aliki Tsirgialou and Dimitris Rigopoulos and finally the Translation and editing by Maria P. Margaronis, last but not list to the organisers, John Lampakis of the Lampakis Family who was also present(!) as well as the Mrs. Agatha Kalisperas and staff from London’s Hellenic Centre! 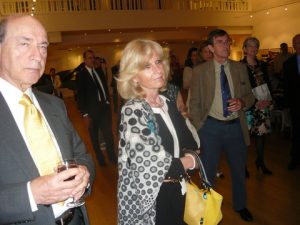 Amongst he 200 plus faithful attendees, we spotted Professor Richard Witt – a very interesting man to know; from the City of Westminster Councillor Jan Prendergast with Judith Abrahams; Sophie Kydoniefs, Dr. Spyros Retsas, Vivi Vithoulka, shipbroker Nicholas Skinitis and his wife Pyghi -President of the “Lykeion ton Ellinidon”, world-cruise-life-traveller Mary Agrafiotou, soprano Katerina Mina, George Lemos, Antigone Veltsidou-Bentham and her husband Paul, Nicholas Argyros – Counsellor at the Greek Embassy, Dr. Victoria Solomonidou – the Cultural Attaché at the Greek Embassy, and her husband John, Mary A. Cunningham and many others, particularly non Greeks, and that’s a plus!

Except the Catalogue of the Pictures and Printed material of “The First Modern Olympics Athens 1896”, on sale was at a special price Sir Michael Llewellyn-Smith’s book “Olympics in Athens 1896”, the masterpiece of its kind – a must book to have! Having read the book, I strongly believe that this is a special account on how the entire World benefits to all intents and purposes from the Olympic Games and the respect that should be given to the Immortal Hellenic Mind and Greece’s over ten millennia of civilization!

The event, organised by the Hellenic Centre,  is sponsored by The Hellenic Foundaton, The Hellenic Centre and an Anonymous! The exhibition is open until Sunday the 12th of August 2012, Monday to Friday 4-6 p.m., and morning school visits are more than welcomed. Viewers can call + 44 (0) 207 487 5060 and make the necessary arrangements. 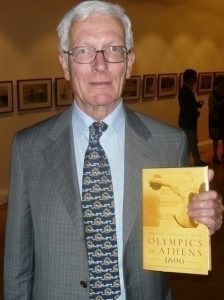 Sir Michael Llewellyn-Smith holding his book”Olympics in Athens 1896″, a rich and entertaining story of one of the most potent symbols of modern times

*Michael Llewellyn-Smith was born in 1939 and brought up in England, with two sisters and two brothers, at a school in Berkshire where his father was headmaster. He was educated at Wellington College at Crowthorne, Berkshire, a public school founded in memory of the Great Duke of Wellington, and at New College, Oxford University, where he studied classics, ancient history and philosophy. He went on to obtain a D Phil at St Antony’s College Oxford, for his doctoral thesis on the Greek occupation of Smyrna (Izmir) and western Asia Minor in 1919-22. He is the author of four books with themes in Greek history and culture. The Great Island is a book about the history, culture and folklore of the island of Crete, reflecting his travels and researches there in the early 1960s (travels with a donkey!). Ionian Vision: Greece in Asia Minor 1919-1922 is the story of Greece’s ill-fated venture into Asia Minor, ending with the destruction of Smyrna and the end of the ancient Greek communities of Asia Minor. Olympics in Athens 1896: the Invention of the Modern Olympic Games is the story of how the young Greek state and the city of Athens developed rapidly to a point at which they found it possible to host successfully the first modern Games. Athens: a Cultural and Literary History presents the life and culture of the city of Athens across the centuries, explaining how the modern city copes with its ancient heritage. Michael Llewellyn-Smith has also written a short book about the history of the British Embassy at Athens, which was the house of the Greek statesman Eleftherios Venizelos before it became the British Embassy in 1936. He is currently researching the life of Venizelos. He has lectured extensively at Universities and for Swan Hellenic Discovery Cruising. He has written reviews for the Times Literary Supplement and the Anglo- Hellenic Review. Michael Llewellyn-Smith joined the British Diplomatic Service in 1970 and served in it for thirty years, in Moscow, Paris, Warsaw and Athens as well as London. He was British Ambassador in Poland from 1991-96 and in Greece from 1996-99. As student, teacher, diplomat and traveller he has spent more than eleven years in Greece. He is married, to Colette née Gaulier. They live in south Oxfordshire, and travel often to Greece and France. They have two children, Stefan and Sophie, and four grandchildren, David, Alexander, Nicolas and Alice. Sir Michael Llewellyn-Smith was awarded the CMG in 1990 and the KCVO in 1996. He is an Honorary Fellow of St Antony’s College Oxford, a Vice President and member of the Council of the British School at Athens, member of the Council of the Anglo-Hellenic League, Vice President of the Bristol Institute of Greece, Rome and the Classical Tradition, Honorary Fellow of the Eleftherios K Venizelos National Research Foundation, Chania, and Patron of the Friends of Mount Athos. He is a visiting Professor at King’s College London and has been a visiting Fellow of the British School at Athens, visiting Fellow at Princeton University, foreign Fellow of the Onassis Foundation, and holder of the Venizelos chair of modern Greek studies at the American College of Greece (Deree College) for 2009-2010. He is a non-executive Director of Coca-Cola Hellenic s.a.

Medicine and the Olympic Games of Antiquity