NEMEA 2012 – In the footsteps of Heracles 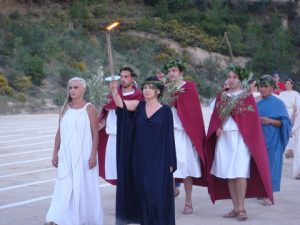 Talking about sports and particularly the London Olympics these days, the Greek Sports Mind has more to offer. The following which describes the latest on the Nemea 2012 Games, is complied by Mr. Spyros Retsas who also contributed the images:

The 5th Nemead – the modern revival of the Ancient Nemean Games – the inspiration of the visionary Professor of Archaeology at Berkeley, Stephen Miller, took place between 22nd and 24th June 2012 at the ancient stadium of Nemea.

Participants, spectators and amateur athletes of all ages representing more than one hundred countries lived the magic of a spectacular opening ceremony as the sun was setting over the temple of Zeus, excavated and in restoration by the indefatigable Miller, who has long settled with his Greek-American wife Effie in the modern town of Nemea.

The Nemean flame, lit in the proximity of the temple of Zeus, was carried in a dignified procession led by the personified Nemea and escorted by (the also personified) Ekecheiria (truce) to the ancient stadium whilst Spartan warriors in ancient combat gear laid on the ground their spears and shields in a symbolic gesture to the cessation of hostilities – the respected and largely inviolable truce of ancient times. 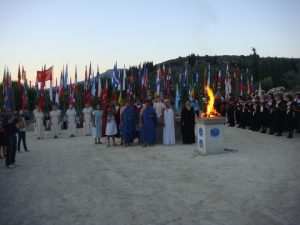 The flame burned at the altar of the stadium throughout the athletic competitions of the next day. Only two events were held: a 100 meters sprint and an endurance race of 7.5 km starting at the ruins of the temple of Heracles at ancient Kleonai and ending at the ancient stadium of Nemea. 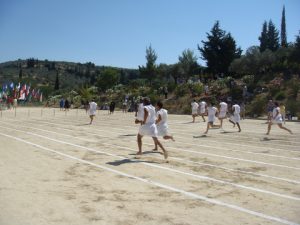 Amateur athletes aged from 4 to 82 years young, with no record to beat, were grouped by age and gender and ran barefoot in the stadium wearing an ancient white chiton (tunic) provided by the organisers.  In ancient times they would have competed stark naked (gymnoi) but this is no longer considered “fashionable”. 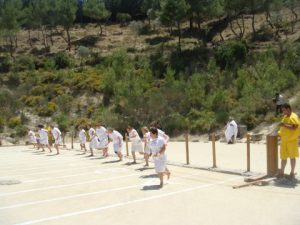 The starting line, in evidence for more than two millennia and the complex starting mechanism assembled by local car mechanics were there to send them off to victory. 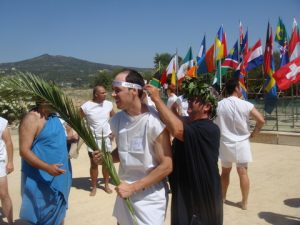 There were no silver or bronze medallists, only one winner in each group, who would be offered a branch of a palm tree and a ribbon to tie around the head until the closing ceremony when, as in the ancient times, the crown of wild celery would be placed on their head affirming their victory. 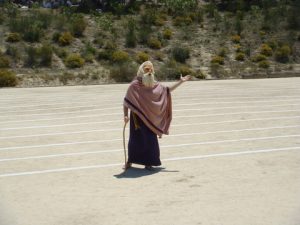 There was a refreshing mid-day intermission with a recitation by Professor of Ancient Music, Stelios Psaroudakis of excerpts from Aischylos’ Agamemnon and a presentation by the Musical Group “The Melody of Logos” of original musical arrangements of verses from ancient poems by Archilochos and Sappho.

The participants in the endurance race assembled at the ruins of the temple of Heracles who according to legend performed his first labour in the area, wrestling the lion of Nemea.

“Do you swear to abide by the rules of the Nemean Games and to do nothing that would bring shame to you, your family, or the spirit of the ancient Games?” asked the judge standing on the highest point of the ruins and reciting an adapted version of the ancient oath of the Olympic games. Some 300 of us swore to abide and in temperatures of 38 C we started climbing, in the footsteps of Heracles, the 7.5 Km from ancient Kleonai to the ancient Stadium of Nemea. We entered the stadium, on condition of taking our shoes off and ran (or walked) to the finishing line barefoot.

At the setting of the sun the victorious athletes were crowned with wreaths of wild celery and the closing ceremony came to the end by extinguishing the flame at the altar with Nemean earth, as local choral societies sung the Nemean and Olympic hymns. The evening ended with a banquet and fine Nemean wine generously provided by the people of Nemea. 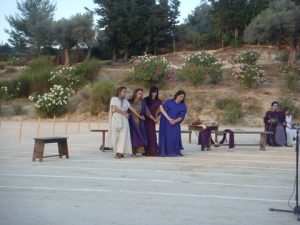 Another treat was to come the following evening with a theatrical performance by the “Sikyonian skene” reminding us of a whole cycle of myths and historic events centred on Nemea and her ancient Games. In the finale, local youths dressed in white, folded the Greek flag and entrusted it to (a personified) Nemea for safe keeping until 2016.

The gods would have approved!

The spectacular opening ceremony, the purity of the contests and the faultless organisation of the awards that followed, the magic of the closing ceremony, the generous hospitality of the Nemean people in the evening and the emotions felt by the participants of the cultural event of the last day, eclipsed in their minds many modern Olympiads. This is a cause to celebrate and support in the future.