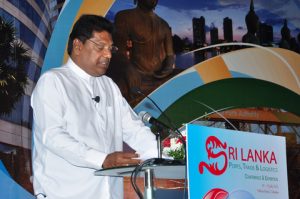 Officials and top executives in the maritime industry opened the first session of the Sri Lanka Ports, Trade & Logistics conference in Colombo today with some compelling visions and facts concerning the country’s future commercial potential.

Chris Hayman, chairman of Seatrade, welcomed the distinguished speakers and invited them to deliver their plans, thoughts and assessments of Sri Lanka’s maritime future. He remarked “These are challenging times for the world’s major economies and the shipping markets, but here in Sri Lanka we see a country and an economy that shows real confidence in its future.”

The Hon. Kumara Welgama, Minister of Transport, made the welcome address.  He said that following decades of terrorism, the new regime has laid the foundation for the rapid economic development of the country within a global framework. The minister added “Development of the seaports and airports is extremely important to achieve the vision of developing Sri Lanka as the maritime, aviation, commercial, energy and knowledge hub in South Asia.  In view of the strategic location of our country and with the prudent leadership of His Excellency the President Mahinda Rajapaksa, steps have been taken to develop the main ports of Sri Lanka, to facilitate increasing export and import trade associated with rapid economic development.” 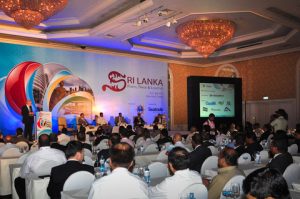 Chris Hayman at the podium addressing the conference

Dr Priyath B Wickrama, Chairman, Sri Lanka Ports Authority, spoke of the huge ports investment that the government had already made and the opportunities that still exist. “All these port development projects remain investment opportunities for both local and international investors.  Sri Lanka Ports Authority has already invested over $3 billion in port development projects and in addition the private sector has committed an additional $3 billion”

He went on to say that Sri Lanka’s state-run ports agency is targeting a further US$1 billion of investment at the southern Hambantota Port in a request for proposals that closes in August 2012.

Noboru Ueda, Chairman & President, Class NK, Japan, gave an outside view and assessment from the world’s largest classification society of Sri Lanka’s unique position, talking about the importance of emerging hubs in the Indian Ocean.

After more than 40 years in the maritime sector, Mr Ueda said he had witnessed many changes in the industry, citing the great shift from West toEast of shipping and shipbuilding and the huge rise in Asian shipbuilding and more recently ship owning.

Mr Ueda continued, “The next great shift in our industry is already taking place. The rise of the Southeast Asian, South Asian and Middle Eastern players and their growing importance in the world maritime industry. It is this shift from the Atlantic and Pacific oceans driven eras of the past and present, to a new Indian ocean driven era that we are fast approaching”

He went on to say that at the heart of this new maritime region, and at the heart of world trade, is Sri Lanka, he believes that Sri Lanka could easily emerge as the new great maritime nation – joining the ranks with Singapore and the UAE as a leader in the maritime world.

The two day Sri Lanka Ports, Trade & Logistics conference continues today and tomorrow and will cover a range of other topics pertinent to the island’s development potential as South Asia’s new transhipment hub.

Ulrich Ulrichs has been appointed Managing Director of Rickmers-Linie