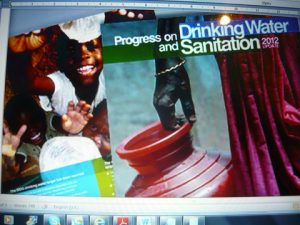 The world has met the MDG target of halving the proportion of people without access to safe drinking water. Photo: UNICEF-WHO

10 July 2012 – A group of United Nations independent experts today urged States to intensify efforts towards realizing the anti-poverty targets known as the Millennium Development Goals (MDGs), stressing that there is no room for complacency with only three years before the 2015 deadline to achieve them.

“Human rights standards provide a normative framework that grounds development work within a universal set of values, but also provide an important tool for ensuring that development is pursued in an equitable, just and sustainable manner, ” they said in a news release.

Independent experts, or special rapporteurs, are appointed by the Geneva-based Human Rights Council to examine and report back on a country situation or a specific human rights theme. The positions are honorary and the experts are not United Nations staff, nor are they paid for their work.

The eight MDGs, agreed on by world leaders at a UN summit in 2000, set specific targets on poverty alleviation, education, gender equality, child and maternal health, environmental stability, HIV/AIDS reduction, and a “Global Partnership for Development.”

A study published last week – the 2012 Millennium Development Goals Report – highlights the progress made, with three important targets on poverty, slums and water met three years ahead of 2015. It added that meeting the remaining targets, while challenging, is possible – but only if Governments do not waiver from their commitments made over a decade ago.

The group of UN experts pointed out a number of areas that must be addressed urgently, asking for Governments to strengthen their efforts to achieve the MDGs, while also ensuring that the post-2015 development agenda will be based on human rights obligations.

“If the preliminary estimates shown in the report are confirmed, the target of reducing the extreme poverty rate by half will have been reached at the global level ahead of the 2015 deadline. That is very good news, ” said Ms. Sepúlveda. “However, the scale of extreme poverty remains appalling, with more than one billion people still affected.”

In relation to safe drinking water, Ms. de Albuquerque noted that in spite of the target of halving the proportion of the population without sustainable access to safe drinking water and basic sanitation “significant disparities still exist and the most vulnerable people in the world have not benefited from progress.”

In terms of achieving universal access to education, Mr. Singh emphasized that although significant progress has been made, it is important to ensure that education fulfils the relevant standards of quality, and that it does not exclude certain populations.

In relation to health, Mr. Grover commended the global reduction in deaths of children aged under-five and increased access to treatment for people living with HIV. He said that more needs to be done to meet the target of reducing maternal mortality by three quarters.

For his part, the expert on the right to food, Mr. de Shutter, said that despite efforts, progress towards eradicating hunger has been very limited, with the number of people suffering from malnutrition and hunger remaining largely unchanged since 1990. In particular, he pointed to the rising global food prices as a setback to achieving this goal.

The 2012 Millennium Development Goals Report stated that core development aid has fallen due to the fiscal constraints faced by many countries during the global economic crisis. In relation to this, the international solidarity expert, Ms. Dandan, said that international cooperation must transcend barriers of fiscal constraint or the goals will not be fully met, nor will human rights obligations be fulfilled.

On the issue of debt burdens, Mr. Lumina expressed concern that debt ratios have continued to increase in the least developed countries and Small Island States, adding that fair terms of trade and debt relief efforts are needed to address this problem. He called on the international community to “renew its debt relief efforts.”

“Legal Preparedness for the Green Economy”