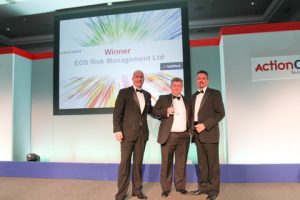 The Financial Award was presented for a phenomenal turnover growth of 700% throughout 2011 and for the implementation of robust business systems and support structure to sustain continued growth.

“The news of receiving the two Awards came whilst I was on business in Scotland, ” says David Johnson, Managing Director for Eos.

“It was quite a surprise because we were up against some tough competition and although we knew we had been entered we never thought we would have won one, let alone two!”

The second Award was presented for Business of the Year West UK Region. ThisAward recognises outstanding achievement and the ability to embrace a coaching philosophy to support growth.

Over 160 businesses entered the 6 main Award categories with a further 5 Business of the Year Regional Awards offered.

Each year the ActionCOACH UK Awards are about success and recognition of businesses and individuals who have achieve outstanding success from hard work and dedication. ActionCOACH is an international coaching organisation, one of the oldest of its kind. For more than twenty years the coaches have been supporting businesses across the world through a proven business growth strategy to achieve exceptional results.

Eos has a thriving international business combating the likes of Somali pirates and introducing intelligent counter-piracy tactics for ship owners and operators to protect precious cargo and crew. The training division of the company has seen immense growth over the past year with fully booked courses within a matter of days.

David concludes: “Huge thanks to Ian Nicklin, the ActionCOACH who works alongside Eos as a sounding board and guide for our ideas, business structure and of course, the occasional kick up the backside!”

Winning the awards comes shortly after Eos were announced as runners up in the 2012 Queens Awards for International Trade and the local Sentinel Business Awards.