We can still save our reefs – 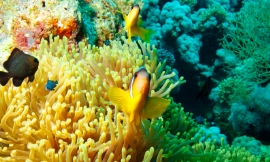 “[Corals] have stood up to several episodes of global warming and high CO2 in the past – and bounced back, even from mass extinction events.” – Image: ultramarinfoto/iStockphoto

John Pandolfi keeps his optimism alive despite the grim scientific evidence he confronts daily that the world’s coral reefs are in a lot of trouble – along with 81 nations and 500 million people who depend on them.

The world-renowned coral scientist from the ARC Centre of Excellence for Coral Reef Studies and University of Queensland has traced the story of the world’s reefs over more than 50 million years and is deciphering delicate signals from the past to reveal what doomed them in previous extinctions – and how this compares with today.

This knowledge is priceless in understanding what we humans have to do to prevent such a tragedy recurring, he says.

“I’m an optimist – you have to be, to devote your life to this field, ” he explains. Despite scientific predictions that the current trajectory of human development will eliminate 90% of the world’s coral reefs by the end of the century, Pandolfi considers it is still within our power to save 60 or 70%, provided we act quickly to limit the things that drive corals to ruin.

“Corals themselves are remarkably resilient. They have stood up to several episodes of global warming and high CO2 in the past – and bounced back, even from mass extinction events.

But the sobering fact is that it can take coral reefs up to ten million years to re-establish after a major extinction event, he says. “That’s a long time to wait if your industries, communities and food supplies are dependent on reefs.”

The big issue today is that most of the world’s coral reefs face a ‘double whammy’ of accelerated global change combined with local stresses from pollution, runoff and overfishing. These local, man-made, factors were absent during previous world coral crises, he points out.

“Also, while corals have withstood hot climates and high CO2 in the past, we have so far been unable to identify any period in Earth’s history when CO2 levels rose as rapidly as today.”

The good news, he says, is that experiments in Australia and round the world have shown it is possible to curb overfishing, runoff and pollution, to limit their local impact on corals. “Our latest studies have shown corals have a great capacity to bounce back if you take these pressures off them – and this means we still have a window of opportunity to act.

“But we need to act immediately.”

On Thursday, July 12, Prof Pandolfi presented his team’s latest research to the International Coral Reef Symposium. This work aims to disentangle the impact of local effects (like runoff and rainfall) from global effects (like warming and ocean acidification) on the coral’s ability to calcify (or grow) by studying rates of calcification in the columnar coral Goniopora over the past 1000 years.

“We’ve observed widely different effects in some corals – for example when calcification of Porites corals declined by 14% on Australia’s Great Barrier Reef, it increased by 24% on Western Australian reefs.  This has got to be down to local effects, as both corals are experiencing some of the same global impacts.”

Managing corals so they thrive, as in the case of WA, may hold the secret of saving the world’s coral reefs in a time that might otherwise bring near-extinction.

Mission Microbiomes: the new expedition of the Tara...