A star ascends the dizzying firmament of Indian classical dance – 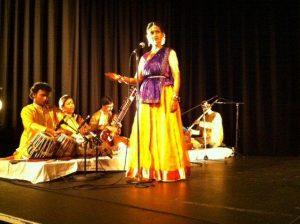 In the performance of her life, London-based kathak exponent Crishna dazzles an awe-struck audience By James Brewer

Radiant, communicating heartfelt emotion with every step and gesture, sparkling dancer Crishna Budhu instantly won the affections of a highly discerning audience for her landmark solo performance, at the west London venue Watermans Arts Centre, which has been a major platform for Indian culture since its opening concert by Ravi Shankar in 1984. 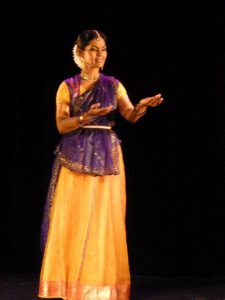 Crishna commanded the stage as a study in perpetual, rhythmic and hypnotic motion, flowing in perfect harmony with her accomplished accompanists, themselves thrillingly of the very best of the genre of kathak, one of the eight forms of Indian classical dance, of which she is a recognised and highly skilled practitioner.

Her performance on July 14 immediately attracted plaudits from her home territory of London and from overseas, including from renowned gurus of the speciality. One of the great assets of kathak is that its pulsating beats, often restless drive and narrative concepts make it readily accessible to those with only a passing acquaintance with the world of Indian culture. It owes its origins to the nomadic storytellers, known as kathakars, of northern India.

No soloist is an island. Crishna found her fame to date alongside her sister Camilita in a dance duo, and has supplemented this by intense work under the guidance of the leading kathak practitioner Sujata Banerjee, who founded a dance company under her own name in 1985 to promote south Asian dance and music in the UK and beyond. In a tribute to the success of this collaboration, Ms Banerjee herself was on stage at the Watermans throughout, providing padhant (recital of the rhythmic words that drive the dance).

Crishna’s considerable stage experience accumulated over the years coalesced into a magnetic presence, in which joyous rapport with the audience was total. Her devotion and warm humour shone through as – never for a second short of breath after the dizzying whirls  demanded by much of the repertoire – she told us precisely what she was going to do next. Her ability to flit from breathtaking spins to highly nuanced movements of eyebrow, face and fingers was a wonder.

It was here that the intense covenant with padhant Sujata Banerjee paid off especially. Evident from the start too was the crucial teamwork between Crishna and the tabla player Aniruddha Mukherjee, whose effortless precision vibrated thrillingly in the heads of spectators long after the two-hour session was over. 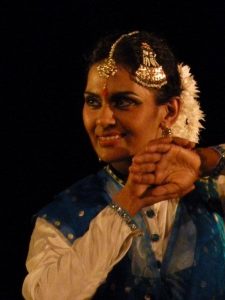 As compere Natalia Hildner (she was once described by The Hindu newspaper as “grace personified”) detailed, the evening bore the title Parampara, which means heritage or tradition, in this case the passing down of the art form of kathak dance through the generations.  With the invaluable inspiration of Sujata Banerjee, the evening performance was a showcase of Crishna’s mastery of the repertoire.

Crishna began with a Ganesh Vandana, the invocation to Lord Ganesha, who represents the power of the supreme being. This is the customary way to open ceremonies and displays of the arts.

From there, she expressively performed the 16 beat time cycle teental  (tal means a clap), which is the most common rhythm in Indian classical music. In this piece she performed thaat, the opening sequence; aamad –considered  the piece de resistance of the dance; parans with its spoken rhythmic words( rhythm picked up from the tabla), tihais (footwork compositions), and lari (footwork variations). Crishna went on to dance other taals like the 14-beat dhamar and ashtamangal tal which are the nritta aspect of kathak, meaning pure dance without a story. The beauty of nritta in Kathak lies in the exact rendering (padhant) of the rhythmic patterns made audible both by musical accompaniment  and the dancer’s intricate footwork.

In the nrittya (interpretive aspect) Crishna danced the ghazal Tanha Tanha, a lyric poem of longing, and concluded with Raas, a drama depicting Lord Krishna’s dance with the gopis (milkmaids). During the ghazal, the emotion was intense and seemed to bring tears to the eyes of the performer: it certainly did so to some of those in the auditorium. This was a convincing display of the essence of nrittya which emphasises abhinaya, communication of the meaning and emotion of a story or a song, through facial expression, using gestures of the hand and symbolic postures of the body.

Crishna wore exquisite Hindu and Mughal dress styled by some of the very few tailors informed in the kathak tradition. In the invocation, we saw her in authentic lehenga-choli combination with ordhani veil-cloth.  The lehenga is a loose ankle- length skirt which swirled gorgeously during her spins; and the choli is a tight fitting blouse.   For the ghazal, we saw her in a Mughal costume known as angarkha. The design of this is a flared knee length dress over a churidar (tight fitting trousers); and the whole was set off by splendid ornaments in the hair.

Completing the line-up of tireless accompanists were Chandrachur Bhattacharya on sitar, Anirban Bhattacharya vocal and harmonium, and Jonathan Lawrence on flute.

With the event staged just ahead of the opening of the Olympic Games, a souvenir card to mark the occasion was designed by Camilita, with an Olympic-inspired logo defining the five classical beats of the kathak dance. The five rings recall the five beats constantly used in rhythmic pattern: tia dha dig dig thei.  There was symbolism too, in that the performance took place on the 14th, and 1 + 4 equals five.

Crishna’s dedication and her determination to reach these new heights was recognised in goodwill messages from the eminent teachers in India Pandit Birju Maharaj and his senior disciple Saswati Sen; and from London a bouquet of flowers with a message of good luck from Shri Pratap Pawar, and similar tribute from  Sujata Banerjee and many other friends, family and well wishers who were present.

Indeed it was a night to remember. Many thanks to offer tickets to WISTA-UK members. The premiere was well attended and very much enjoyed by everyone and the indian snacks were delightful!

The music also was beautiful.

The evening bonus was that the venue offers free car park a luxury and rare commodity these days!

Camilita and Chrisna supported WISTA-UK in the past, when we organised the 2009 London Conference.

Many thanks and congratulations to Chrisna and also to Camilita, the inspiration for Chrisna!

We enjoyed Crishna’s show tremendously. She looked so confident throughout her performance and everything was so well organised. I have known the two sisters Crishna and Camilita for a good many years and they are both very special. I wish you lots of good luck in the future, dear Crishna. Your solo performance was outstanding!
I especially enjoyed the dance with a rain of rose petals and your endless whirls. The three costumes you presented were all very beautiful with a very tasteful colour scheme.
All the best in the future!!!
Graciete.