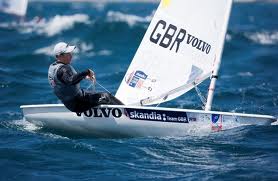 Across the seven different classes the finale was marked by light, conflicting breezes with at least as many title upsets unfolding through the day as there were expected winning scenarios playing out on cue.

In the evenly balanced 420 Boys class a hard earned final race victory by Barcelona’s twin Brothers David and Alex Charles won them the title, complementing the gold medal in the 29er skiff class which was secured on Thursday by club mates Carlos Robles and Florian Trittel.

The Charles brothers went into the last race in third, considering themselves outsiders for the gold medal, but they were able to capitalise on their own great start whilst their nearest rivals, the French pair which have lead most of the regatta – Guillaume Pirouelle and Valentin Sipan – tussled in the depth of the fleet with the Netherlands Pieter Goedhart and Lars Van Steklenborg

“We have been consistent in very difficult conditions and that has made the difference, ” concluded Alex Charles.

While the two pairs of Spanish gold medallists celebrated together, all good friends who started out in Optimists together at the same club some 20kms up the coast from the Catalan capital, there was a tough measure of heartache for the USA’s Mitchell Kiss in the Laser Radial Boys class.

Just as the French duo had been arithmetical favourites to win the 420, so Kiss had this morning looked poised to deliver in the Boys Radial fleet.

But, with a BFD disqualification as his discard result, Kiss ultimately fell prey to Australia’s Mark Spearman who held his nerve and corralled the class leader to the back of the fleet on the first leg.

There was no way of breaking free for the unfortunate American sailor who crossed the line 52nd with the Perth based sailor one place ahead.

That being Spearman’s discarded race, he secured Australia’s only gold medal of the championship. “My worse race was 17th so I was always going out to do what I did. We stayed on a knock for ages and when we tacked back and from there we were last and second last.

“It is part of racing to do that. I was able to do that because I had sailed consistently in the rest of the regatta, ” said Spearman. “It is an inspiration to see the form of Tom Slingsby and Tom Burton at the moment, but they are people I want to beat in the future. You have to get to that level. It is a long road but this is a stepping stone. Everyone else has had good and bad races, I have been consistent, sailing safely with less risk, starting one third from either end and tacking on the right shifts.”

The most emotional moments of the regatta came fittingly when Dublin’s 16 year old Finn Lynch was carried shoulder high from his native waters, still in his Laser Radial, after sailing to silver, the best ever ISAF Youth Sailing World Championship finish for the host nation which has delivered a truly memorable, perfectly executed regatta.

In the Laser Radial girls class Gothenburg’s Julia Carlsson was the absolute model of consistency, only one finishing outside the top 10. The quietly spoken, cool Swede finished with a 1, 2, 2, 3 to wrap up her nation’s first ISAF Youth Sailing World Championship medal since 2006.

“I sailed the best I ever sailed when I needed to. I was really nervous all the way through the race today. Tactically I feel like I have sailed well, ” Carlsson said.

Great Britain’s haul of two gold medals and one bronze contribute substantially to their wresting the Nations Trophy, breaking the French monopoly on the team award for the first time since 2008.

Whilst Britain’s SL16 catamaran winners Rupert White and Tom Britz had done enough by Thursday to win overall, in the RS:X Girls their compatriot Saskia Sills did what she needed to today to clinch her first world title at just her second ever international RS:X race series.

After bronze at the RS:X Youth Europeans earlier in the month, Sills came back from a nervous wobble in the penultimate race of the series, to win the title with a second place, finishing just behind Israel’s silver medal winner Naomi Cohen.

“I am so chuffed, I can’t believe it, ” smiled Sills who only started in the RS:X late last year. “I have not been on the water as much as I would have liked for the last three months because I have had exams, and so I have just been working hard in the gym. I did not expect to even medal. My first RS:X international event was only last week.

“We have had videos from the Olympic team, Nick Dempsey and Paul Goodison, and all the support team around us have been encouraging us to start this Olympic summer with medals and here we are.”

Sills has been largely dominant in the girls’ RS:X fleet with four wins and three second places in her scoreline but in the RS:X Boys Italian Mattia Camboni was relatively unknown to Korea’s double Youth Worlds medallist Cho Wonwoo.

Though the Italian sailor returned ashore with a silver, it was a bittersweet result for him. He needed only to beat the Korean today to steal the overall title from the RS:X sailor who has a gold from Zadar, Croatia last year and silver from 2010 in Istanbul.

Camboni was duly on target to do just that, with Cho well behind, until the first attempt at a race was abandoned due to a big windshift.  When Race 12 ran its full course, Cho finished third while Camboni could only manage fifth after a bad start.

“The first race was so shifty I went the wrong way and was very bad. I thought I had lost the title. But it was cancelled. But I cleared my mind. My mind is strong and I used my anger to get a good start. The second race was much lighter and that is what I like. This is the most difficult, more difficult than last year. I did not know the Italian guy but he is a great sailor. I can’t believe I have won again, ”  said Wonwoo.

The Italian girls Ilana Paternoster and Benedetta Disale, from Genoa, held on to their consistent scoreline in the difficult conditions to land the 420 Girls title. Australia’s Carrie Smith and Ella Clark struggled in the early part of the difficult final race and took silver ahead of Britain’s Annabel Vose and Kirstie Irwin in bronze.

“We cannot believe we are world champions, maybe this evening or tomorrow it will sink in. We never even expected to get in the top five, far less win. But we have worked hard for it. We could look back and see where the Australians were and knew we could do it, ” said Paternoster.

Sailors enjoy the Closing Ceremony later on this evening where they will be presented with their medals and trophies.

*delayed due to technical problem