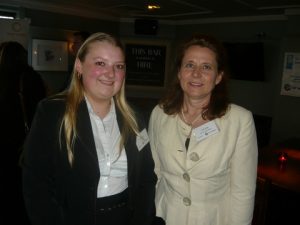 After trying other venues off the banks of Thames, the Seahorse Club’s* summer party returned to Doggett’s Coat & Badge** off the southern side of Blackfriars Bridge. Despite the late afternoon rain, it proved the place to watch the tranquil colours of the illuminated river with its unique views of this part of London at that time of the night; Father Thames at its best! Last time I was there was back on 2004 and did like it, as the river breeze was really beneficial complimenting the vibrant atmosphere create by the party’s faithful! 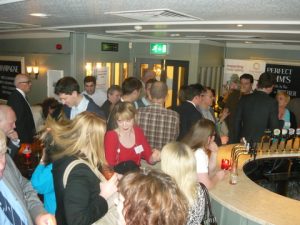 At the Bar when the shower was on…

Sponsored by DP Ports it was an interesting gathering with obviously networking having its day! I guess women where more than men this time, strange eh! The BBQ was wooow, the drinks too – free double-vouchers!

Isis’ and Chairman of the Seahorse Club, Peter Owen did the… rituals encouraging the further development of the Club in his short but to the point speech in which we also mentioned the passing away of veteran journalist James Snowden. 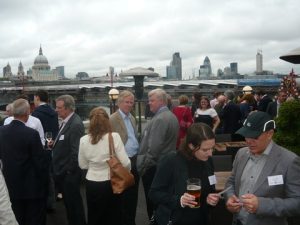 …and a full boat deck!

A raffle was held too in aid of Transaid, the nominated charity, conducted by Ian Matheson with pink and yellow winners, …and a couple from the other colours too.Enjoy the summer break, and hopefully the London 2012 Olympics!

Good to see after many years Craig Jallal (pictured opposite with the baseball cap) and meet amongst others newcomers Samantha Giltrow, Helen Jauregui, Milda Manomaityte, as well as Claire Nicholls, Matthew Beddow, Tom Conroy, Lindsay Mulholland, Chris Saynor; James Brewer was there too as did Sandra Spears, Sue Terpilowski and her huband Tom, Ian Mathesson, Miryam Fahey and the Man from Ithaka Paul Ellis! 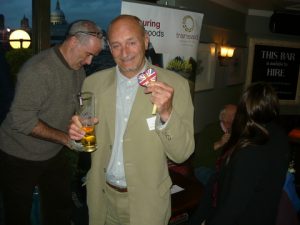 *The Seahorse Club is a lively networking group, which draws together a variety of public relations, marketing, advertising and journalism professionals within the freight, passenger, shipping and logistics sectors.

Whether you represent transport principals or promote an in-house service, the Seahorse Club provides an excellent opportunity to meet others with similar jobs and interests. Regular events are held designed to inform, entertain and create debate, drawing on the experiences of members, special sectoral guests and trade journalists, including a Winter Awards presentation recognising industry journalism talent and the Summer BBQ

** The party was held last Wednesday

The Propeller Club, Port of Piraeus is hosting...