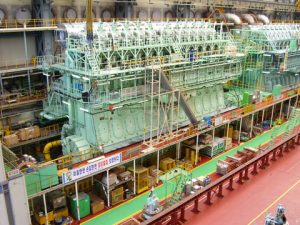 Physically the largest two-stroke engine ever designed by MAN Diesel & Turbo, the engine will deliver a massive torque of 8.5 million Nm at 84 rpm and has a total output of 69, 720 kW. The engine has been built by one of world’s major two-stroke engine builders, Hyundai Heavy Industries, and it will be installed on a container vessel built at Samsung Heavy Industries for Orient Overseas Container Line (OOCL), a Hong Kong-based container shipping company well recognised for focusing on sustainable and environmental friendly technology advancements.

Since the beginning of the global economical crisis in late 2008, MAN Diesel & Turbo has experienced that shipowners are investigating possibilities for reducing operating costs, through measures like low-load optimisation of engines, slow steaming and operation with turbocharger cut-out. These tendencies led MAN Diesel & Turbo to offer possibilities supporting optimised propulsion efficiency by way of lower propeller speeds by using longer-stroke engine designs.

This, in combination with the need to meet the newly introduced Energy Efficiency Design Index, EEDI, made MAN Diesel & Turbo develop the MAN B&W super-long-stroke S90ME-C9.2. Developed specifically for container ships, the S90ME-C9.2 is based on the VLCC-optimised S90ME-C8, which in the meantime also found applications in a number of container ships.

Furthermore, the G series of engines with even larger stroke to bore ratios, has been made available, with G40, G45, G50, G60, G70, and G80 type engines supporting the tendency of using lower propeller speeds with a super-long stroke for all ocean-going ship types.

In addition to the basic optimisation of the propulsion plant for container ship operation, by using the low propeller speed supported by the S90ME-C9.2 engine, the engine is delivered with the following three different MCR optimisations:

The rebuilding and parameter set-up changes necessary for switching between particularly MCR points 2 and 3, and thereby ensuring optimum operation conditions for relevant trade patterns, are minimal. 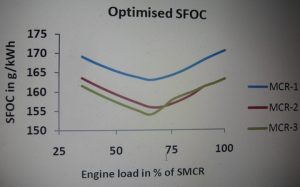 MAN Diesel & Turbo SE, based in Augsburg, Germany, is the world’s leading provider of large-bore diesel engines and turbomachinery for marine and stationary applications. It designs two-stroke and four-stroke engines that are manufactured both by the company and by its licensees. The engines have power outputs ranging from 450 kW to 87 MW. MAN Diesel & Turbo also designs and manufactures gas turbines of up to 50 MW, steam turbines of up to 150 MW and compressors with volume flows of up to 1.5 million m³/h and pressures of up to 1, 000 bar. The product range is rounded off by turbochargers, CP propellers, gas engines and chemical reactors. MAN Diesel & Turbo’s range of goods includes complete marine propulsion systems, turbomachinery units for the oil & gas as well as the process industries and turnkey power plants. Customers receive worldwide after-sales services marketed under the MAN PrimeServ brand. The company employs around 14, 000 staff at more than 100 international sites, primarily in Germany, Denmark, France, Switzerland, the Czech Republic, India, and China. MAN Diesel & Turbo is a company in the Power Engineering business area of MAN SE, which is listed in the DAX share index of the 30 leading companies in Germany.