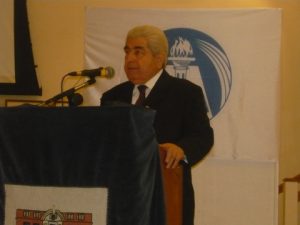 President Christofias at the podium delivering his speech

We bring you herebelow verbatim the remarks by the President of the Republic of Cyprus, H.E Mr. Demetris Christofias at the Inauguration of the Exhibition “Sports in Cyprus-A History of Centuries”. the event took place last night at the Great Hall of London’s Hellenic Centre. John Faraclas was there with his camera. The speaker was introduced by Antigone Tamba from the Cyprus Sport Organisation. He said:

I am particularly happy to be here with you today, at the inauguration of this outstanding exhibition.

Cyprus’ rich and notable bonds with sports can be traced back through the centuries and constitute an integral part of our cultural heritage, for which Cypriots are exceptionally proud.  As of today, this heritage will be exhibited in the heart of Londonduring the 30th Olympic Games, the foremost sports event in the world. Cyprus is here, present to promote, through its history, the universal values of Sports and of Olympism. The Olympic Days of London will also be the Cyprus Days. 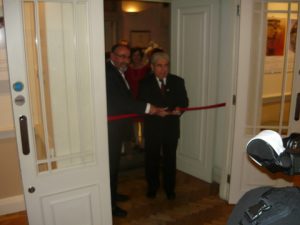 Sports, just like culture in general, reflect, preserve and enrich the cultural identity and heritage of society. Cyprus’ heritage is revealed through the 40 images of archeological findings presented in this exhibition, entitled “Sports in Cyprus- A history of Centuries”.

Since antiquity, Sports has been an integral part of the life of Cypriots and a basic element of the education of youth. This is illustrated through the archaeological findings which have been unearthed in Cyprus, and are exhibited in the museums of our country. The exhibition also manifests Cyprus’ strong bonds with the ancient ideal of Olympism and the ancient Olympic Games.

Cyprus’ Sports heritage is also presented in the documentary we have just watched, which records the historic course of Sports inCyprus, from ancient times to the present day. A course which is literally a reflection of the turbulent and tragic history of our country and our people. 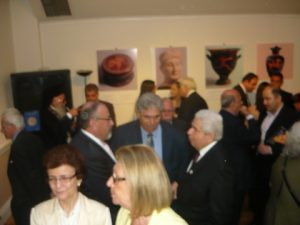 …and talking to friends

I express my satisfaction for the decision of the Sports Authority of Cyprus to offer this Exhibition as well as copies of the documentary to the Cypriot Community of the UK. I am confident that these will be put to good use by the National Federation of Cypriots.

Even though it was not possible for them to join us here tonight, allow me to congratulate the children of the choir of the Independent Greek School of Finchley and their teacher Mrs. Stalo Georgiou for their success in winning the first prize in the secondary school song competition for the Olympics. We are proud because their success honours Cyprus and its heritage abroad. 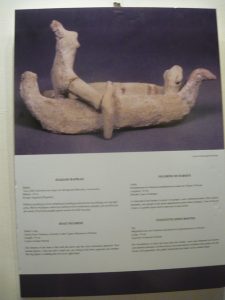 Concluding, I want to wish every success to all the athletes, members of the Cyprus Olympic Team. I am convinced they will do their utmost to represent their country worthily. We shall proudly stand by them to support them, looking forward to new distinctions.”

After his speech the entire congregation – 200 guests went at the  Friends Room where all where thrilled with the unique exibition! The reception which followed with traditional dips and drinks brought people closer in discussing the uniqueness that sports play in our lives; excellent!