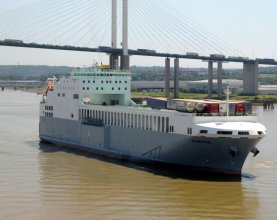 C.Ro Ports at Purfleet has welcomed the latest vessel to join Cobelfret Ferries fleet, Wilhemine, on her maiden call on the Thames.  Wilhemine is the third vessel in a series of four being built for the company by Kyokuyo in Japan.

The vessel will be a regular caller on the Thames on the route from Purfleet to Zeebrugge.   C.Ro Ports and Cobelfret are jointly the busiest operator on the Thames, with vessels travelling from their terminal at Purfleet (just upriver of the QEII road bridge) and Ford Motor Company’s facility at Dagenham to destinations in Belgium and the Netherlands offering around 40 sailings every week. Cargoes carried on their services include everything from cars and machinery to foodstuffs and supermarket supplies.