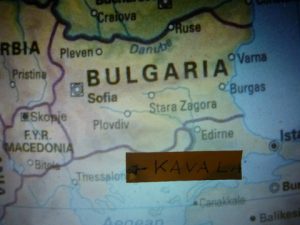 A map of the region where all four ports are mentioned

Sea2Sea: Developing a multimodal freight corridor to connect the Aegean to the Black Sea

The Green light was given for this linkage by the European Commission  to develop a multimodal freight corridor to connect the Aegean to the Black Sea. The CEO and president  of the Kavala Port Authority Minas Tatsis expects the positive decision from the European Parliament and then the already arranged coordinating meeting of all parties involved on the 10th of September in Brussels.

The proposed Action is a pre-feasibility study for an infrastructure project linking the rail ports of northeast Greece (Kavala and Alexandroupolis) to Bulgarian ports on the Black Sea (Varna and Burgas) and the Port of  Russe on the Danube towards the inland waterway network to Central Europe. By developing PP21 (Motorways of the Sea) and PP18 (Waterway axis Rhine/Meuse -Main-Danube), it will provide an alternative route for freight flows between the Mediterranean and Black Seas and Central/Eastern Europe, thus bypassing the Bosphorus/Dardanelles strait, a congested point of maritime traffic.

The proposed is of high relevance to both TEN-T policy and the call priority, as it promotes the intermodality and integration of the transport system. The overall maturity of the action is very good, it has received the necessary political support from both Member States involved, public consultation is ongoing, and procurement procedures have been defined. The proposed action will be used as a valuable input for further policy decisions in the involved Member States and will have a significant impact on regional development. However, at the corridor level the impact will be lower. The quality of the proposal is very good, project management is very well planned, risks are identified and the study will produce a good value for money making input for relatively low costs. This however, may entail a risk of underestimation of related costs.

A plan, more advanced than this one was tabled back in 1984 by John Faraclas, creating Kavala the Trieste of the Aegean and servicing a hinterland of 350 million people.  We intent to bring forward the entire project of Mr. Faraclas which was also extensively covered, primarily, in Lloyd’s List and other media.