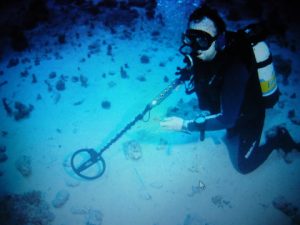 In October 1619 the naval warship Warwick sailed into the King’s Castle Harbour in Bermuda with an important cargo from England; the colony’s new governor, Captain Nathaniel Butler. After taking on provisions the Warwick was to travel onto the struggling colony at Jamestown, Virginia, but it never made the voyage.

Before the ship could sail, Bermuda was hit by a fierce hurricane. Battered by strong winds the Warwick broke free from her anchors, was driven into the rocky shore, and torn apart by the pounding waves. In 1969 Mendel Peterson of the Smithsonian Institution and now famous Bermuda shipwreck hunter EB “Teddy” Tucker located the remains of the Warwick and began an examination of the wreckage. What they found was a good part of the hull remained preserved under a pile of ballast stone. Fast forward another 50 years and a new group working under the supervision of the island’s National Museum began a more extensive examination of the site and recovery of some significant historic artifacts.

The museum enlisted some renowned experts in the field of marine archaeology to assist in the project. One is Dr. Jon Adams, head of archaeology at the University of Southampton who says “the Warwick is one of the largest and most coherent pieces of early 17th century ship structures ever found.”

Dr. Kroum Batchvarov with the maritime archaeology program at the University of Connecticut adds “very few wrecks of the early seventeenth century have been excavated which has limited our knowledge of shipbuilding and seafaring in this period. This makes the archaeological excavation and documentation of the Warwick an important contribution to that body of knowledge.” Professor Kevin Crisman of the Nautical Archaeology Program at Texas A&M also thinks this wreck holds enormous potential for educating archaeologists, historians, and the public.

“It could illuminate the early years of England’s great century of overseas expansion, a time when the first English colonies were being planted in North America and around the world.” The location of Warwick’s remains makes it an ideal archaeological site. The wreckage lies in 15 to 30 feet of water in a protected harbor. Seventy feet of the hull structure is preserved and researchers are now beginning to excavate, record, and analyze it. During the work this summer divers recovered a cannon, navigational tools, rudder hardware, parts of barrels, and fragments of ceramic containers. One of tools aiding in the recovery work is JW Fishers Pulse 8X underwater metal detector.

Diver James Davidson reports, “we have been quite successful with the detector finding a range of targets including cannon balls, musket shot, bar shot, and various lead artifacts at depths up to 3 feet below the seabed, and cannon buried as deep as 6 feet.” Professor Crisman says “Collectively these finds tell us an amazing story of the changes being wrought in Bermuda and around the world by mariners, merchants, and colonizers.

The fabric of the Warwick, it’s framing timbers, planks, beams, and knees are also providing us with a new benchmark for understanding the ships that England sent around the world in the 17th century. We already know much more about the materials, design concepts and assembly practices of early English shipwrights than we did at the start of the excavation.”

Africa: London 2012 Will Leave a Lasting Legacy for the UK and the Olympic Movement – Unep Executive Director