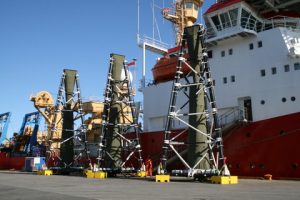 Following a competitive Invitation To Tender (ITT), Faroe Petroleum (U.K.) Limited has selected PetroMarker AS to carry out an EM survey on their “Grouse” prospect.The “Grouse” prospect is located in UK License P1853 which lies North of the Shetlands, in a promising area for future developments.

Bengt Magnussen, PetroMarker’s Contract Manager, commented that: “… Petromarker is very proud to have won this contract in a competitive process and we look forward to tackling the challenges of the site.”
The EM survey will be executed with the newly mobilized “Normand Baltic” at the end of June.

PetroMarker AS is a marine EM oil & gas exploration service company based in Stavanger, Norway, whose activity help oil companies in:.

PetroMarker’s EM technology is based on the unique, fully patented, vertical electric method which offers better accuracy, high sensitivity and deeper penetration, depending on local geology.
PetroMarker AS activities range from feasibility studies prior to offshore investigation, preparation of the offshore surveys, acquisition and processing of the data, interpretation and recommendation to the oil companies.