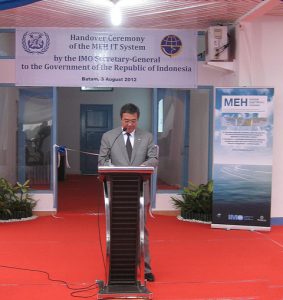 IMO Secretary-General Koji Sekimizu visited Indonesia in August 2012 for the hand over of the Marine Electronic Highway (MEH) IT Centre to Indonesia and to receive notification, from Indonesia, of its intention to ratify several IMO conventions.

The Marine Electronic Highway (MEH) Information Technology System for the Straits of Malacca and Singapore, which had been managed by the International Maritime Organization (IMO), has been handed over to the Government of Indonesia in a formal ceremony in Batam, Indonesia, marking the final stages of a demonstration project and the potential move towards a full-scale MEH project in the Straits, under the ownership of the littoral States.

IMO Secretary-General Mr. Koji Sekimizu formally handed over the Batam MEH IT System to Mr. Leon Muhamad, Director General of the Directorate General of Sea Transportation (DGST), Indonesia, during a special ceremony today Friday the 3rd August 2012, which was also attended by representatives from ministries and agencies of Indonesia, the Local Government of Batam, the Marine Department of  Malaysia, the Maritime and Port Authority of Singapore, Ministry of Land, Transport and Maritime Affairs of the Republic of Korea, the International Hydrographic Organization, Nippon Maritime Center and the shipping industry.

“What we are handing over today is a functioning facility that harnesses the power of information technology to assist safe navigation through a defined and limited part of the Straits, ” Mr. Sekimizu said.

The Batam MEH IT System is one of the major deliverables of the MEH Demonstration Project, which has been under implementation since 2006, funded by the Global Environment Facility (GEF)/International Bank for Reconstruction and Development (IBRD) (World Bank), with IMO as the executing agency. The Republic of Korea, through the Ministry of Land, Transport and Maritime Affairs (MLTM), also provided a grant amounting to US$850, 000, which was used to develop and establish the system.

The overall objective of the demonstration project has been to determine whether a full-scale MEH in the Straits of Malacca and Singapore can be economically justified and made financially feasible. The project is a co-operative arrangement with the three littoral States of Indonesia, Malaysia and Singapore, in partnership with the Republic of Korea, the International Hydrographic Organization (IHO), the International Association of Independent Tanker Owners (INTERTANKO) and the International Chamber of Shipping (ICS).

The geographic boundary of the MEH Demonstration Project extends from One Fathom Bank in the Malacca Strait to Horsburgh Lighthouse in the Singapore Strait, including adjacent coastal provinces/states of Indonesia, peninsular Malaysia and Singapore.  This covers the whole traffic separation scheme for the Straits of Malacca and Singapore.

The MEH Demonstration Project has been extended until the end of 2012, so that all its tasks can be completed and technical and financial evaluations of the Batam facility can be carried out.  Indonesia now takes on the responsibility for the operation, maintenance and management of the MEH IT System in Batam, while also working closely with Malaysia and Singapore on the regional MEH system beyond the demonstration phase.

Funding from the World Bank has been allocated to Indonesia in order to accelerate the implementation of activities that will enhance the safety of navigation along the Sumatran coast of the Straits of Malacca and Singapore by putting in place the relevant maritime safety infrastructure, not only to provide data to the MEH IT System but also to enhance the monitoring and management of the Indonesian coasts of the Straits of Malacca and Singapore.

“This handover of the MEH IT System to the DGST is a great opportunity for Indonesia to step up as one of the key partners in the establishment of a regional MEH System, together with Malaysia and Singapore, ” Mr. Sekimizu said.

“We stand here today, not at the end of an initiative, but at the beginning of a wonderful new opportunity to help usher shipping into a new era of safety, efficiency and environmental sensitivity. For me, the development of the maritime infrastructure and the move towards new and improved ways of achieving enhanced navigation and traffic control are among the pillars of sustainable maritime development, ” Mr. Sekimizu said.

“I firmly believe that the Marine Electronic Highway can be a great success – indeed, that it can provide a blueprint for similar schemes in other parts of the world; and that, collectively, they can have a massive beneficial effect on our global society which depends so much on the safe, secure, efficient and green carriage of trade, by sea”, Mr. Sekimizu said.

It is anticipated that the next steps in the creation of the MEH will involve Malaysia and Singapore establishing MEH Data Centres to house and operate MEH IT Systems similar to the Batam MEH IT System, in order to establish a regional network, to be called the MEH System.

The Marine Electronic Highway of the Straits of Malacca and Singapore

The Straits are shallow, with narrow channels, irregular tides and shifting bottom topography, and hence are hazardous to navigation for large ships. Despite their difficult navigational features, the Straits are the shortest and hence the preferred shipping route between the Indian Ocean and the South China Sea, and for oil tankers trading between the Persian Gulf and East Asia.

The MEH system has both maritime safety and environmental modules.  Its environmental modules can be used in marine pollution response and control, for example, to predict the direction and speed of oil spills, and thereby assist in response and clean-up operations. It is also possible to use it to identify and track ships that illegally discharge their bilges or dump other oily wastes.

The MEH portal is athttp://www.mehsoms.com/

Registered users can access data on maritime traffic in the Straits, and on wind, tides and currents, as well as electronic navigational chart (ENC)-based marine information overlays (MIOs), such as those indicating mangroves, coral reefs, special areas, etc.  (MIOs are spatial layers that, when overlaid on to an ENC at specific coordinates, provide additional information on that particular area in the ENC. For example, a tropical island generally has advancing foreshore mangrove forests and, in ENC, the areal extent of each mangrove forest is not delineated. However, it is delineated in an MIO and, when overlaid on the ENC, it provides added spatial information. This is useful in protected waters or areas designated as special areas).

Databases using Oracle store data received by the MEH IT System, including information on casualty incidents, maritime traffic conditions and weather.  These can be accessed at any time but not as real-time data sets.

Data feed and exchange are carried out between the MEH Data Centre in Batam, Malaysia (Marine Department) and Singapore (Maritime and Port Authority).

IMO – the International Maritime Organization – is the United Nations specialized agency with responsibility for the safety and security of shipping and the prevention of marine pollution by ships. Web site:www.imo.org