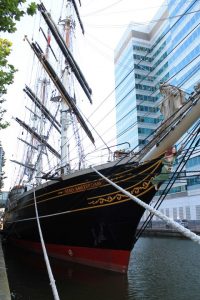 The “Stad Amsterdam alongside West India Quay in London

Hutton’s, the UK’s leading ship supplier, is playing its part in supporting the London 2012 Olympic Games. Hutton’s is the official supplier to the Clipper Stad Amsterdam which is home to an array of Dutch team supporters and official Dutch events during the Games.

Stad Amsterdam serves as the hospitality home base for guests of Randstad Netherlands, the Dutch Olympic Committee, the City of Amsterdam, Ernst & Young, Pon and Aegon.  As well as hosting business meetings, the high-profile vessel provides guests with a range of hospitality including high teas, dinners and lunches prepared on board by the resident chefs.

Using its fleet of state-of-the-art climate-controlled vehicles, Hutton’s is supplying Stad Amsterdam daily with a range of provisions and supplies to help its 30-strong international crew host up to three receptions a day on the 76 metre-long vessel with its three mast square rig boasting 31 sails.

The range of products supplied includes locally-sourced top-quality ingredients such as fresh fruit and vegetables from London’s Covent Garden market, fresh fish direct from Billingsgate market and meat from a local butcher, as well as specialist chocolates, flowers, Dutch foods and celebratory items like Dutch-flagged cocktail sticks and Heineken glasses.

Jon Hickey, Hutton’s Sales Manager, said: “This is a lovely and unique vessel to supply and it’s great to be able to play a part in helping our Dutch visitors enjoy these fantastic Olympic Games. Let’s hope the medals role in for their team too!”

Amanda Jonathans, Hotel Manager for the Stad Amsterdam said: “The Olympics is our biggest program of this year. During this extremely busy and demanding period, Hutton’s has worked very well with us. The products they are delivering and their services are high quality and we look forward to working with them again in the future.”

·         Hutton’s has developed as the UK’s one-stop shop facility providing the full range of products and services to the international shipping and the offshore industry.

·         With a history dating back almost 200 years, Hutton’s has the largest UK branch network and has recently expanded to offer a high-standard supply service in West Africa