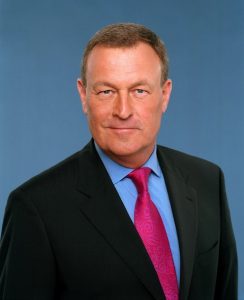 One of Britain’s most experienced television newsmen, Jeremy Thompson will be Master of Ceremonies at the 9th edition of the Seatrade awards in the Middle East on Monday, 26 November.  Hailed as the Oscars of the maritime and shipping world, the glittering evening is held at the spectacular Atlantis, The Palm, Dubai and sees more than 850 of the industry’s leading players gather to celebrate a night of awards for the industry.

The region’s leading exhibition and conference for the marine sector, Seatrade Middle East Maritime, starts the next morning and runs from 27-29 November at the Dubai International Convention & Exhibition Centre.

Mr Thompson will anchor the first day of the conference programme, which includes a high-level Keynote Session in the morning, including industry leaders from across the region, followed by a round table debate session on the economic and trading environment for shipping, including shipowners, charterers, bankers and economists.

According to Chris Hayman, Chairman of Seatrade and organiser of both events: “We are delighted that Jeremy Thompson will join us for these two events.  Jeremy is a widely respected broadcast journalist who I am sure will add great value both to the Seatrade Awards dinner and to the Seatrade Middle East Maritime conference.”

Of particular significance is the Keynote Session held on the opening morning of Seatrade Middle East Maritime.   Leading industry figures taking part in this session will include:

As a foreign correspondent, Jeremy has covered over a dozen wars and civil conflicts. Since moving back to London in 1998, he has been involved in many of Sky News’ biggest live news events including the Liberation of Kosovo in 1999, the terrorist attacks of 9/11, the second Gulf War in 2003, and the Indian Ocean Tsunami.

In 2011, Jeremy reported from Pakistan following the death of Osama bin Laden, presented live on the ground in Tripoli during the uprisings in Libya, and was one of the few journalists given permission by the Syrian Government to report from Damascus.