Glory in reds, gold and grey: sketches and paintings from the Thames Diamond Jubilee Pageant by Lynda Minter 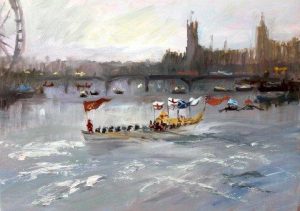 The Gloriana passing Westminster, By Lynda Minter, oil on canvas

– Glory in reds, gold and grey: sketches and paintings from the Thames Diamond Jubilee Pageant by Lynda Minter, By James Brewer

London artist Lynda Minter says that the Thames is the place to be – even on a cold, gloomy day. She has captured with her bold paint strokes on many occasions the river and the skyline in all their capricious moods, and in her new series of oil sketches and paintings from the Diamond Jubilee Pageant, she has integrated magnificently the dramas of blustery nature and stately marine navigation.

The Gloriana passing under Battersea Bridge, By Lynda Minter, acrylic on paper

Lynda, whose home is close by the river in west London, told us of the surpassing excitement as a painter of securing an ideal vantage point on that chilly Sunday, June 3.

“It was a damp, grey day but with all the anticipation we hardly noticed the weather, ” she said.  “In fact I was lucky: I had a wonderful viewpoint on a barge belonging to an old friend and moored near Battersea Power Station .  We saw the whole procession.  My camera was clicking away ten to the dozen – there was no time even to make the quickest sketch as I so wanted to capture all the boats, all the atmosphere.

“The grey silver light was perfect for me as an artist as it made all the colours sing.  The royal barge Gloriana was glorious in every respect with reds and golds, wonderful.  We felt that that was the vessel that the Queen should have been on … it was magic.

“A few days before the Jubilee pageant, I had been to St Katharine Dock, where I was able to make some oil sketches of the boats getting ready for the pageant.  The tall ships just beyond Tower Bridge made wonderful silhouettes against the pale grey sky, so English.  A blue Mediterranean sky would not have done!” 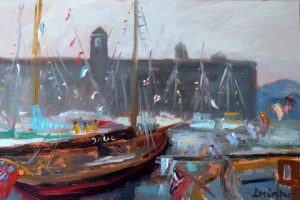 Said Lynda: “What a year on the Thames this has been, with the river pageant, the Olympic rowing and so much more. The Thames from past times is coming alive again as a place to be.”

She added that the small studies she has done are being shown until December at the Lacy Road Gallery, Putney, London SW15.  For more information ring 07849053662.  Further images can be seen on www.lyndaminter.com