Abel Tasman sails back into his rightful place as a giant of seafaring history, thanks to new book from Australian author Christobel Mattingley – 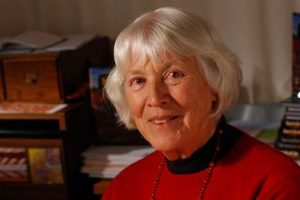 Abel Tasman sails back into his rightful place as a giant of seafaring history, thanks to new book from Australian author Christobel Mattingley –   By James Brewer –

One of the greatest seafarers of all times – and one who has tended recently to have been overshadowed by other celebrities of exploration  – is being celebrated in a beautifully written new book.

It is an account that will do much to restore Abel Janszoon Tasman to full recognition as a master navigator and a courageous and principled European pioneer of surveying the unknown waters of the southern hemisphere. He and his crews ‘discovered’ and began to chart a fifth of the world’s area:, opening the way more than 100 years later for white settlement of Australia, Tasmania, New Zealand and other territory, but his bosses were not satisfied: he did not identify enough treasure or prospects of lucrative trade. 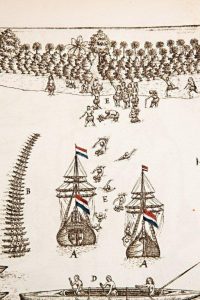 Islanders swimming with coconuts to the vessels Heemskerck and Zeehahn,
1643

Tasman is very much a hero, though, in My Father’s Islands: Abel Tasman’s Heroic Voyages. The book is a retelling of the voyages in the 1630s and 1640s of a brilliant and skilled master in the employ of the Dutch East India Company, one of the largest trading and shipping businesses of all time.

The author, Australian historian and children’s writer Christobel Mattingley, puts her words into the mouth of Tasman’s young daughter Claesgen, but as is her wont, Mrs Mattingley bases every sentence on scrupulous historical and technical research, in this case making use of Tasman’s journals and other documents. There are some wonderful illustrations from the drawings in his 1642-43 journal of the voyage on which he discovered Van Diemen’s Land (renamed Tasmania in 1856) and Staten Landt, soon to be known as New Zealand, and various Pacific Island groups.  Navigational terms from the 17th century are explained in footnotes –some of them may be an education to modern mariners.

Abel Tasman, his wife Jannetje and daughter Claesgen, Painting by Jacob Cuyp, about 1637

The heroine of the story naturally worships her father’s grit and gallantry, but she begins to get an insight into conditions at sea, and the ruthlessness of the Dutch East India Company. The author thus stops short of romanticising the exploits of Tasman, and details some home truths about the maritime industry of those days, which find an echo in the practice of the occasional rogue shipping company today.

Deliberately sent out from Batavia (now known as Jakarta) on poorly-equipped vessels, he was ordered on a first expedition to find turned out to be non-existent gold and silver islands to the east of Japan, and later expected to unlock the mystery of the ‘Unknown South Land’. Despite a company promise, on his first big expedition the ships were provided with little firewood and water, and lacked ballast.  The crew had to dig sand and gravel for ballast, as soon as they reached a suitable island.  It was not a good start, said Tasman with his frequent understatement.

It is clear that those who did the work were considered third-class citizens. “While the sailors wear coarse canvas clothing, the [wealthy Dutch] merchants dress in fine woollen suits, well tailored, with shirts of well laundered linen, ” says Claesgen Tasman, adding later: “Oh! The terrible fears and terrifying dangers that no-one except a seafarer knew!”

The vessels were cumbersome and unwieldy, making for uncharted seas without any of the modern equipment now taken for granted. The author’s yachtsman son, Christopher Mattingley, who recently sailed to many of the islands visited by Tasman, reported: “If you have not sailed through coral reefs, you cannot appreciate how good Tasman’s seamanship was.”

Tasman was born in a farming village, in 1603, a year after the Dutch trading empire was founded to exploit the commodities and manpower of Asia. He signed on as an ordinary seaman with the company, and was only 31 when he was appointed master of one of the ships seeking out safe trading lanes for the monsoon seasons.

Published by the National Library of Australia, this is Mrs Mattingley’s 51st book (ISBN:   9780642277367). She told us: “Although I was asked by the Library to write a children’s book, I hope it will also be read by adults, as there has been nothing written about him in English since 1975. Sadly, as the European seaman who explored one fifth of the earth’s surface, he is relatively unknown these days. “

The idea for the book came from a 1637 portrait held by the Library by Dutch artist Jacob Cuyp, depicting Tasman with his hand on a globe, with his second wife and daughter Claesgen by his first wife who died when Claesgen was a baby.

The Dutch government has taken a considerable interest in the book, which will be featured during Dutch Cultural Awareness Week in November in Canberra, as has the Dutch Australian Society in Tasmania. The Dutch consul attended the launch in Adelaide and lent a flag for the occasion.

This fascinating book should help to ensure that once again, Capt Tasman is appreciated fully for his nautical prowess alongside Capt James Cook, Capt Matthew Flinders and other heroes of the southern seas.

The book may be ordered via the online bookshop of the National Library of Australia http://bookshop.nla.gov.au

For the UK, the distributor is Roundhouse Group www.roundhousegroup.co.uk