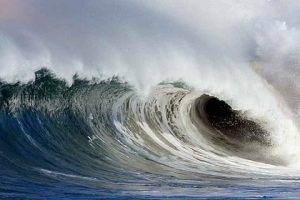 -Are extreme waves and winds on the rise across the globe?

A question for Professor Alexander Babanin

THE 26-metre (nine-storey) rogue wave in Sebastian Junger’s The Perfect Storm is an extreme case, but it’s the lesser giants that have Professor Babanin concerned. Across the world, waves heights are growing. What’s more, the director of Swinburne University’s Centre for Ocean Engineering, Science and Technology says wave physics has been missing from most climate models.

What is the basis for this research?

The wave-heights research was based on a study in which Swinburne and Australian National University researchers used satellite altimeter data sets from around the globe spanning 23 years, from 1985 to 2008. This research, published in Science magazine last year, indicated that the winds and waves have been growing — the winds more than the waves. Extreme wave heights and wind speeds have been growing even faster than the mean values, which means storms have become more severe or frequent.

How big is the increase?

And in the Australian context?

The waves south of Australia in the Southern Ocean are already the largest on the planet and they have been growing at the fastest rate. Today the average height of the top 1 per cent of waves off south-west Australia’s coastline is about six metres. That’s more than one metre higher than in 1985.

But the change around the globe is not uniform?

No. The winds of the Southern Ocean have been growing at a much faster rate than the winds globally. Also, it’s not uniform in time. The southern winter is when most of the growth has been occurring. Another example: the Indian monsoon appears to have shifted in time over this 23-year period. And the wind speeds off the Queensland coast have grown in April, but reduced in May. If you average that over the year there is no growth, but actually what used to happen in May is now happening in April.

Is Australia a hot spot in terms of changes in extreme weather?

Well, Australia is a big country and in latitude it stretches from tropical, or basically equatorial, down to the Southern Ocean. For that reason alone it is subject to very different weather and climate phenomena. In the changing climate, those phenomena move around and change in intensity, and because Australia is so big and covers so many climate zones there’s a greater probability of encountering such change.

There is an expectation that with global warming occurring, tropical cyclones would be becoming more intense. In Australia we have so many tropical cyclones — more than 10 per year, on the east coast, west coast and in the north — so that can affect Australia significantly. It will affect other countries as well but here we will really see it.

Was your study the first of its kind?

It was the first time that the waves and winds were treated in the global climate context. We’re talking about validating climate models against these observations — it’s that finer detail that we have to reproduce: not just overall mean growth but also the change in climate patterns.

This is very true. The winds and waves are very important both as indicators and features of the climate, because they are part of the air-sea interaction — the exchange of energy, momentum, gas, moisture, heat between the ocean and the atmosphere — which actually determines the climate. Climate models to a large extent have tried to describe the air-sea interaction but the waves are very small-scale by comparison with the climate. The waves could not have been accounted for until recently because of computer facilities, but also there was the expectation they would not affect the large-scale processes — they would be averaged out.

So refining the science could help save lives?

It is quite possible this can improve significantly the prediction of the intensity of tropical cyclones, for example. I expect significant advances here very soon.