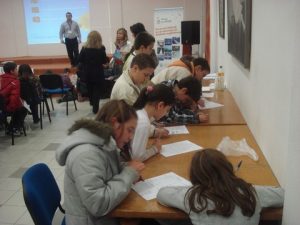 Schoolchildren in Volos completing the questionnaire

The preliminary results of a study being conducted by HELMEPA relating to the informing on and raising of awareness oν environmental issues among primary and secondary school students in regional areas of Greece, have been proven to be interesting.In their majority, the 3, 000 primary and high school students from the cities ofVolos, Serres andThessalonikiwho have thus far participated in the study have been shown to be environmentally informed and aware. Αt the same time the children expressed their concerns for the continued degradation of our natural environment. 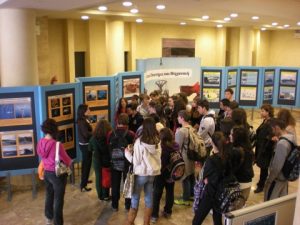 Three out of five students report litter in the streets and on beaches to be the most serious environmental problem in their area, while they consider the lack of parks and green space in their cities to be a significant issue.

The fact that the younger generation seems to have an elevated environmental consciousness is made apparent by the fact that two in three pupils state that they have participated in voluntary activities such as tree-plantings and coastal clean-ups, while 93% of participants report that they have recycled certain materials.

The primary sources of information for students who wish to learn more about environmental matters are school, followed closely by television and the internet.

This particular study is being carried out within the context of the Marine Environment and Sciences Awareness Campaign implemented by HELMEPA, with the support of the UK-based independent charity, The Lloyd’s Register Education Trust* (The LRET), across 12 different cities of Greece.

The survey data are based on the results of a specifically-constructed questionnaire which was completed by students following their tour of HELMEPA’s mobile Exhibition. The Exhibition visited the cities of Volos, Serres and Thessaloniki between February and June this year. 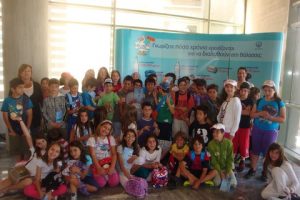 Schoolchildren at the exhibition in Thessaloniki

Younger students, of ages between 8 and 13 years, showed a keen interest in the unit of the Exhibit named “The Marine World”. Of the presentation given to complement the unit, they most enjoyed learning about the wide array of marine organisms together with the interdependent relationships formed between them.

Older students aged between 13 and 16 years, seem to be particularly concerned by the human behavior that leads to environmental degradation. What is encouraging is the fact that they state their intentions to change that image through the undertaking of initiatives in their homes, at school and in their neighborhoods.

Further, what made a strong impression on the young visitors to the Exhibition was the application of technological advancements in shipping and in environmental scientific research. Indeed, one in two students affirmed their interest in pursuing a career either in marine sciences or in maritime engineering in the future.

With regards to the marine environment, students are to a great extent aware of its significance for life on our planet. They report the Port Authorities as being the main body responsible for the protection of our country’s seas and coastlines but yet an overwhelmingly large proportion of students (93%) recognize that they too are responsible in securing a clean environment.

Especially with regards to shipping, students appreciate the significant contribution made by ships in the global transportation of goods. The fact that one in three students classifies ships as being the most pollutant means of transportation, however, shows the need for a more systematic approach to be taken – by the maritime industry itself also – in broadly highlighting the role of the ship as an environmentally-friendly means of transportation relative to the achievements it attains.

A total of 258 adults – accompanying teachers and ordinary citizens who visited the Exhibition in the afternoons and on weekends – also took part in the study. According to them, it is the indifference of citizens and the lack of environmental protection policy that are the factors primarily responsible for environmental pollution. The adults surveyed believe the raising of awareness among children of environmental issues to be very important. Furthermore, one in two adults considers the marine environment to be the most important factor in tourism development inGreece.

The teachers surveyed attribute an assessment rating of “very good” to the Exhibition and its content, regarding that its operation in regional areas of Greece significantly contributes to and reinforces the environmental educational programs they themselves adopt in schools.

This interesting study conducted by HELMEPA will continue at each of the remaining nine of the campaign’s stops, which for the rest of 2012 will be the cities of Kilkis and Kavala – to be visited by the campaign in October and November, respectively.

*The LRET is an independent charity working to achieve advances in transportation, science, engineering and technology education, training and research worldwide for the benefit of all.

News from the Oslo Børs